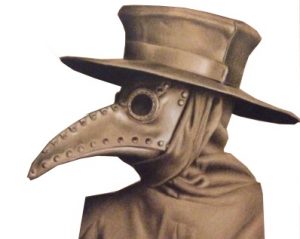 BY DALY WALKER, MD – Masks have been worn in nearly all cultures as a means of hiding individuals’ identities. They have been worn as a form of disguise by thieves, by actors in performances, as part of religious ceremonies, and in secret societies, as well as punishment for a crime.

​However, rather than hiding ones identity, I believe the masks worn today in response to the COVID-19 epidemic reveal something of ones identity (when masks were first used in the theaters of ancient Greece they were called “personas”). So what does covering ones face with cloth or paper say about the individuals who willingly put up with the discomfort and inconvenience of breathing and talking through a barrier? For one thing, it confirms the person believes in science and trusts the infectious disease physicians, the immunologists, the virologists and epidemiologists who tell us that airborne respiratory droplets when infected people breath, talk, sneeze, or cough can land on other peoples’ mouths or noses and cause the corona virus to spread. The research of these doctors unequivocally proves that masks afford protection to both the wearers and those near them from this deadly pathogen.

​There are some that view mandates to wear masks a restriction of freedom, and certainly the freedom of a democracy is a treasure to be protected.  In a democratic society, if a person choses to risk something that might cause harm to himself but not others, it is his or her right to do so, but in an ethical and civil society, the freedom to endanger the well being of others is not acceptable. That is why we have speed limits, food and drug regulations, and laws to protect our children against abuse, and why to risk harm to others by spreading disease when it can be avoided is an injustice.

​To me, the antiviral mask on one’s face becomes his or her true face, and identifies that individual as someone who cares about his fellow man and wants to do, even in a small way, what he can to protect them from disease and possibly death.

Dr. Walker is a retired physician at the Boca Grande Health Clinic.

Newer Post‘Win Big’ Waylon Mills takes first in Howl at the Moon
Older PostA young life changed in a moment: How you can help