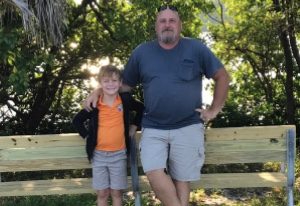 Island iguana trapper George Cera drove by the little bench off the bike path at the south end across from Sea Grape Beach Access every day for weeks, wondering when the caution tape would come down and the splintered boards would be replaced. He waited, then waited some more. Finally, he made a phone call to the community center and spoke with one of the maintenance employees about it.

“When I asked them what was going on with the bench he told me no one could figure out whose responsibility it was to fix it, so they were going to take it down,” George said. “I asked him, if I were the one to fix it, would they still take it down anyway? He said they wouldn’t, so I did. People use that bench all the time, so it didn’t make sense to just let it go. It just needed to be done, so I did it.”

George and his 7-year-old son Tucker spent most of last Sunday afternoon bringing the supplies out and getting to work. The bench is now just as sturdy – if not sturdier – than when it was built, and people will once again be able to enjoy the view of the water while taking a break on their walk or bike ride.

The bench was originally placed there by the Gasparilla Island Conservation and Improvement Association, and supposedly at that time (many years ago) it was decided that the county would maintain it. There was no record of that, though, which led to the confusion.