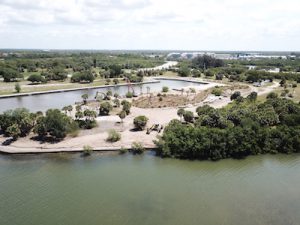 SUBMITTED BY THE GICIA – Construction on the GICIA’s Mercabo Cove Project continues to make steady progress. Recent construction activity is bringing visible and exciting changes to the site. TSI Disaster Recovery along with Project Engineer and Manager, Hans Wilson of HWA, are working together to keep the project on schedule.

The most noticeable change is located along the entrance area of the basin (immediately across from the Boca Grande Causeway). Recent activity includes the placement of fill, installation of reefballs along the edge of the newly created “living shoreline” area and hand placement of rip rap along the entrance wall. Along the 300 linear feet of the existing seawall that makes up the east side of the entrance to the Cove, a tidal shelf is being created. The construction effort along this section has included the removal of the seawall cap and cutting the remaining panels off at Mean High Water (MHW), which will allow tidal exchange. Rip rap has been hand placed along and behind what is left of the seawall panels and the final touch will include the addition of 213 Red Mangroves, which will be planted behind the rip rap. The Mercabo Cove Project has been designed to transform the basin area, which was the former home of Mercury Marine Testing Center, into a marine sanctuary. Long-term benefits of this exciting project include improved water quality, enhanced fish and bird habitat, reduced seawall maintenance costs and visually enhanced views of the preserve site. Construction on the Mercabo Cove Restoration Project began on March 2. It is estimated to cost $2 million and is expected to be completed by August 2020.

When the GICIA purchased this 30-acre parcel in 2016, it housed nine buildings including dry boat storage, conference center, office and small hotel, room for 185 wet slips, and 4,700 feet of bayfront. By the end of the first year of ownership, the GICIA had successfully demolished the buildings and planted over 3000 native trees, grasses and shrubs on the site creating a visually attractive native bird and wildlife sanctuary that would be forever protected from development. Once the upland restoration was completed, the GICIA went to their membership with the idea of restoring the basin to create an aquatic sanctuary.

The GICIA is thankful for the generous support the Boca Grande Community has shown this important restoration project. Once completed the Cove will provide much needed habitat for juvenile snook, tarpon, the critically endangered smalltooth sawfish, dolphin and manatee. If you would like more information on this exciting project, contact the GICIA Office at 964-2667.

Newer PostTime they’ll never get back … Part II: ‘Senior ‘Switch’ continues, and some explain what it’s like to finish this untraditional year
Older PostIsland sea turtles numbers are growing, and so are concerns about beach hazards