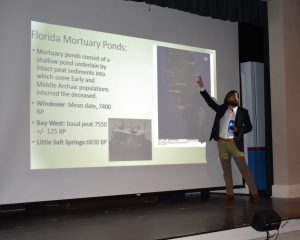 BY SUE ERWIN – Human skeletal remains were discovered in the Gulf of Mexico by an archaeological team in 2017, and Dr. Ryan M. Duggins gave a presentation at the Boca Grande Community Center about the recent archaeological find on Thursday, March 14.

About a year ago, Florida’s Bureau of Archaeological Research announced the finding of a 7,000-year-old underwater burial ground near Manasota Key.

Duggins is the supervisor of underwater archaeology for the Bureau and was charged with investigating the site.

His team started diving at the site in 2017, and some of the first things they found were wood burial stakes that had carvings in them but were not sharpened at either end.

“We have documented each individual stake, and we have started three-dimensional scanning of the stakes, so we will forever have this evidence of what people were doing 7,000 years ago,” Duggins said. It’s a lengthy and ongoing process and probably something that we are going to be doing for years to come.”

A freshwater pond existed at the location 7,000 years ago.

Over the course of many weeks, Duggins and his team swam across the ocean floor with cameras on their heads. In total, they swam over 2,500 square meters to map the site before they started careful excavation, scraping away less than a centimeter at a time.

“There are no best practices about how to investigate an archaeological burial site underwater,” Duggins said. “We found that using kitchen tools – spatulas and pastry brushes – was the most effective way to remove the sediment without damaging the material.”

The scientist showed photos of some of the areas where the team had found human skeletal material.

“We found craniums and teeth mixed in with the marine sediment and possibly hair – at least that’s what it looked like under a microscope.”

The human remains representation a cross-section of the population at the time in regard to age and gender.

He also found decorated wood and modified oyster shells that were possibly used as tools or jewelry.

His work is logistically very intensive, and weather is a huge factor as well as dealing with red tide over the past two years.

“We’re only 300 meters from the shore, but we might as well be on the moon,” Duggins said. “If we forget a tool or if something breaks, the day is shot.”

Most recently, the team has discovered a wooden bowl, sitting on a large, flattened piece of carved cedar. Some theories about the piece of wood: It could be an artistic interpretation of waves, or it could be carvings of feathers.

Beneath the peat on the ocean floor, the team has also found bird bones and fish bones.

“This one small area gives us the history of Florida’s past, going from today to back when the area was a freshwater pond,” he said. “We know that Florida’s indigenous people used that pond as the final resting place for their tribes.”

Duggins said that there are very likely many more of these kinds of sites in the Gulf of Mexico and the Atlantic and Pacific waters.

“Now that we know these kinds of materials may be out there, we need to become aware that there may be potential archaeology in deeper water, because there could be more material that has survived all of these years.”

Duggins and his team have been busy trying to get the word out about the archaeological site. He is working with the Venice Police Department and members of the Sarasota County Sheriff’s Office to install regulatory buoys stating that is it illegal to dive in the water near the underwater burial ground. They also have high-definition video cameras set up on the site.

The event was sponsored by the Boca Grande Historical Society.