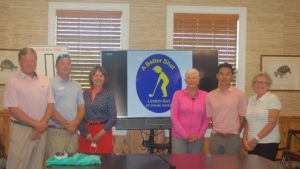 BY T MICHELE WALKER – When Ryan Hartnett, current PGA Assistant Golf Professional and graduate of the Lemon Bay Golf Club’s “A Better Shot” program was young, he wasn’t quite sure what path to take. “It was there that I learned things like responsibility, honesty and sportsmanship,” he said. This program, ‘A Better Shot,’ put me on the right path.”

In 1996, the founders of Lemon Bay Golf Club wanted to reach out to the local community in a meaningful way. Assistant Golf Pro, Missy Eldridge, and club founder (and the late island resident) Kim Honey created Lemon Bay’s Junior Golf. Reaching out to the community’s local youth, the program offered and continues to offer professional golf instruction for ages 5-18. The tuition is $100 but no one has ever turned away because of lack of funds.

Now called “A Better Shot” to better reflect the commitment and core mission values, the program has become a second home to many girls and boys in the community. Golf skills have always been viewed as a happy side effect of the program, with golf’s core values of integrity, honor, self-esteem, and respect the primary focus.

“I joined the junior program when I was 6 years old. I used to ride my bike here with my pushcart,” laughed Hartnett. “To me it was a great place to come and forget about the whole world. I met so many good friends here and so many connections. To this day, this is where I hang out and play golf with some of my closest friends.”

The program’s success stories include doctors, lawyers, nurses, business leaders, and entrepreneurs. Ryan Hartnett and Yuki Fuji, both graduates of the program and early scholarship recipients, now work in the program, mentoring new students and teaching life skills through the sport of golf. The lessons learned by Hartnett and Fuji, remain with them to this day.

“It’s a place that teaches you how to treat others and where we strive to make everyone feel welcome. We’re big on encouraging people and building people up. As I came up through the program, I started off as a student, and then moved on to our junior coaches, which is like a mentorship program. It’s all about giving everyone a better shot and for me, it certainly did,” explained Hartnett.

“Kids become confident and outgoing and know they can be whatever they want to be,” said Ben McCoy, Director of Golf and Head Golf pro at Lemon Bay’s “A Better Shot.” “The smile on their faces will convince you of that in a New York second. ‘A Better Shot’ matters.”

At a time when children need personal mentorship more than ever before, “A Better Shot” fills that role for children in the community.

“ Everyone gets to a point, a crossroads,” elaborated Hartnett. “As mentors, we have the opportunity to see a child who might be heading down that wrong road, and we’re just able to grab them in and encourage them. We spend one-on-one time with them and listen, encourage them. We want them to know we’re here for them to help them make the right decisions in life.”

“I went through the program, I was probably one of the quiet kids Ryan was referring to,” laughed Yuki Fuji, who also works as an Assistant Golf Professional at Lemon Bay. “I first came to the states from Japan in 2008. A month in, we found this summer program and from then on I was here every summer, along with my siblings. I found most of my friends here coming in from Japan. I had zero friends at first and I found the majority of my friends here through golf. It was a great stepping stone just to get into the country to get to know people, great people. I still know a lot of them to this day.”

“There was a time after high school, when we gave you some guidance,” McCoy reminded Fuji. “You snapped out of that. That’s the main focus of the whole thing, This program is where we work with these kids and make them feel like they’re the best things in the whole world.”

In addition to the summer program, Kim Honey felt more could be done for the community and in 1999 the first scholarship from the Lemon Bay Junior Golf Foundation was awarded to a graduating senior. Through the years, the endowment has grown and over the past 24 years, they have awarded over $350,000 to 50 high school graduates residing in the Southwest Florida area.

“These are not members’ children. They’re all local community children who attend during the summer,” said Whitney Ransome, Vice President of Lemon Bay Golf Club Foundation. “Our Lemon Bay members volunteer and support the program and the children, so there’s always an adult with the children teaching etiquette and offering support. It’s a huge effort by our members. Our primary goal is making the children feel proud and letting them know that someone cares about them.”

With an anonymous challenge grant of $100,000 to raise $150,000 in the Fall of 2020, “A Better Shot” launched its first formal fundraising campaign in December’s “Giving Monday.” The Board is working hard to award higher scholarships as well as exploring any prospective partners in Charlotte County who share a commitment to enhancing life skills of its youth.

On March 20, golfers will compete in “A Better Shot” fundraising tournament at Lemon Bay. The format will be a Scramble and is open to all area golfers. The entry fee is $1,000 per team and the field is limited to 25 teams. Socially distanced, delicious outdoor cookout stations on the course will keep players fueled and many of the junior golfers will be on hand.

The program started by Eldridge and Honey back in 1999 is needed more today than ever before in our age of social media and isolation.

“We’re not letting anyone fall through the cracks,” said McCoy.

“We’re here to mentor and give children the best in life,” agreed Hartnett. “Everyone is here to encourage you. It’s a special program and the board members and leadership are all committed to making the program better for the children and the community.”