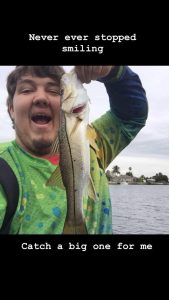 BY MARCY SHORTUSE – The loss of Dylan Edic’s laughter is palpable this week on the island, after he was taken from us in a car accident that occurred on Monday, Aug. 27 in Rotonda.

Florida Highway Patrol reports indicate that at approximately 10 p.m. Dylan, who was 21, was driving his truck on Cape Haze Drive just north of Haitian Road in Rotonda when he lost control on a curve in the road and crashed into palm trees. He died at the scene.

Dylan is the son of Melissa and Dennis Edic of Port Charlotte, born May 9, 1997. His grandparents, Bob and Linda Edic, lived in Boca Grande for decades.

From the time Dylan was very young he loved to fish, boat, beach and play football … but his favorite pastime was laughing with his friends and family.

Dylan worked at PJ’s Seagrille for many years and was always sought out by co-workers and friends for his crazy sense of humor and his ability to make people smile.

“Dylan was a gentle soul,” said his aunt, Darlene Edic Crawford, who was born and raised on the island and whose son Aaron was very close to Dylan. “He always had a smile and a deep laugh. He was always kind to others.” 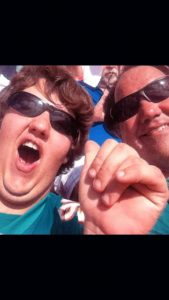 Dylan was almost taken from his family in a car accident that occurred when he was just a toddler. He sustained severe injuries in that accident – so severe that he wasn’t expected to live.

“He persevered and survived, but he always had obstacles to overcome from that severe injury,” Darlene said. “He was loved deeply by his family and those who knew this gentle giant. It will be hard for a long time … but I want us all to treasure the good memories and speak of him often.”

“Dylan was a very special part of our family team,” said Betsy Joiner, a family friend and co-worker at PJ’s. “He was loved by each and every one of us. His big, hearty laugh and smile were a welcome sight every day. What a genuine soul, a very special young man. His dad grew up with my kids, I’ve known him since birth. It’s a very sad time for all of us. I had just had a big hug from him that very afternoon. You never know when your last breath is going to be taken.” 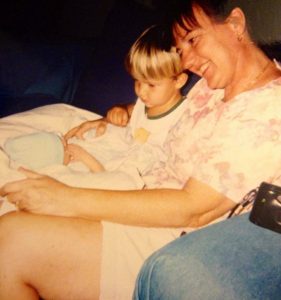 “It’s unbelievable. Such a simply beautiful person is gone, I can’t wrap my head around it. He worked for us since high school, and he started working full-time when he graduated … but he was family to us. He was helping us close the restaurant down, and to organize what was going where in storage. That afternoon we were working on a project together. He was just a big teddy bear, full of love and joy and hard work. He was big-time family to us.”

A gofundme.com account has been set up in the name of “Dylan Edic Family Fund” to help with funeral expenses. That address is gofundme.com/dylan-edic-family-fund.