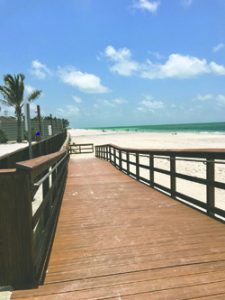 BY MARCY SHORTUSE – The 5th Street beach ramp and public access point is now open again, after the County finished repairing it on June 10.

The ramp was closed earlier in the month after erosion took away the beach underneath it, due to high tides and windy storms.

This particular beach-access point is important, as it is right next to a large public parking area at the corner of 5th Street West and Gilchrist Avenue.

In April the ramp reopened after being closed since the summer of 2017, when strong storms swept away the bottom of the ramp shortly after it was installed.

Newer PostSearene is on fire! 11 releases to win the Red Gill
Older PostIt’s hot, the iguanas are afoot: Here’s what you need to know