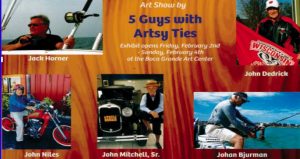 Jack Horner is back in Boca Grande, and during the first weekend in February he’s organizing a winter art show featuring five gentlemen with good connections. “5 Guys With Artsy Ties” is a catch-phrase referring to the men sharing a common interest – watercolor painting.

The exhibit opens with a reception on Friday, Feb. 4 from 5 to 8 p.m. at the Boca Grande Art Center, located at 236 Banyan Street on the island.

The show will continue on Saturday, Feb. 3 and Sunday, Feb. 4 from 10 a.m. to 4 p.m. Artists featured will include Jack, John Dedrick, John Niles, John Mitchell and Johan Bjurman.

“We’ve all been friends for years, and we enjoy working together,” Jack said. When asked what inspired him to start teaching art classes, he said he saw a void of male artists on the island and wanted to create an environment where men would be comfortable while they worked on their paintings.

One of the pitches he’s made for the “Watercolor for Dudes” class that he’s taught is that it’s never too late to learn.

“I do not propose to tell anyone how to paint,” he said. “All I propose is to show you how to gain enjoyment through creating art.”

Jack was president of the Boca Grande Art Alliance in 2006-2007. He organized a juried show in 2007 to commemorate the 20th anniversary of the alliance. The reception event on Friday will include wine and cheese, as well as an opportunity to speak with the artists.