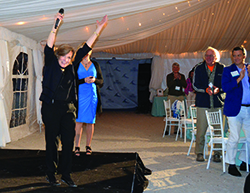 Dr. Sylvia Earle got a standing ovation from guests at the fundraiser. Photo by Sue

The “Your Life, Your Legacy, Adopt an MPA” banquet was held Friday at the resort on Palm Island. An “MPA” is a marine protected area that is clearly defined, dedicated and managed through legal or other effective means, to achieve long-term conservation of nature.

Ierna welcomed and thanked the crowd of about 75 people for attending the fundraiser. “It’s up to each and every one of us to do something to make a difference and help save our oceans,” Ierna said. “In reality, we are all stakeholders in the ocean.”

Earle, the highly celebrated and honored oceanographer who has led more than 70 expeditions and has logged more than 6,500 hours underwater, holds numerous diving records and set the women’s depth record for solo diving at 3,300 feet.

“Sylvia is probably the most important person of our times today in leading the fight for our oceans. Mote Marine’s founder, Dr. Eugenie Clark, gave Sylvia her first job, and Sylvia grew up on Florida’s west coast in Dunedin,” Ierna said.

Earle spoke about the many adventures she experienced with Dr. Clark.

“When I first met Genie, she took my under her flipper and taught me everything I know. She was a very keen observational scientist,” Earle said. “She made it alright for a girl to be a scientist.”

Earle recalled reading a headline when she was 12 years old that stated: “Sylvia Sails Away with 70 Men.”

“That’s when I realized I wanted to be an explorer,” Earle said. “We’re still just scratching the surface. We’re starting to see what we could never see 30 or 40 years ago. If fish could speak to us, just imagine what they would say.”

A special tribute to honor Dr. Clark was given by her son, Tak Konstantinou, and her daughter, Aya Konstantinou.

“My mom never wanted to miss out on an opportunity to learn. She was always trying to inspire young people to share her love of the ocean,” Tak said.

A dinner consisting of lionfish along with locally grown vegetables and other sustainable foods was served at the event. A silent auction also was held that evening.