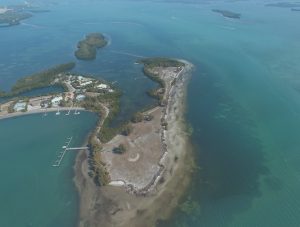 On Tuesday, May 30 Attorney Michael Haymans of Punta Gorda addressed a group of about 25 people who were interested in the continuing saga of Three Sisters Island and Boca Grande Isles.

He also brought up an issue which has been the center of controversy for many, many years on Gasparilla Island, and one that could have a significant affect on the outcome of the development of Three Sisters Island.

Representatives for the Three Sisters Homeowners’ Association set the public information meeting up to explain variances requested regarding access to Three Sisters Island from Boca Grande Isles, primarily concerning the road that magically appeared between them one day.

“Our proposal to Lee County is to provide a roadway to Three Sisters Island,” Haymans explained. “The design aspects require some buffering, and some landscaping as well. Between surface waters there are distances you have to maintain, we are asking for relief from that. We also need a retaining wall for the roadway that needs certain differences from surface waters and wetlands, and those can’t be met at this time due to Lee County standards. We have to show it is a hardship, and that there’s something unique about the property that makes some relief from the code privisions appropriate. This study is how to make the least change from the codes as possible while still meeting development aspects of the road.”

Engineer Tyler Sharpe and Project Manager Debi Pendlebury from Johnson Engineering, two people responsible for the design aspects of the bridge, were also on hand at the meeting. Haymans showed the audience graphics of the road coming onto Three Sisters, then told them how an isthmus had “developed between the two islands” one day in the 1980s.

He also showed photographs of some new landscaping that had been done on Three Sisters, on and around Lot 99.

“The shape of Lot 99, it’s a pie shape,” Haymans said, “and that doesn’t allow much of a connection at the right of way. That’s the constraint on the amount of landscaping – that buffer – that is needed and makes that relief from the code necessary. The isthmus is not big enough to have a road without some relief from those required setbacks.”

Questions were scarce at the beginning of the session. One person questioned the timing of the meeting and the process. Haymans said they expected to already have a hearing scheduled on the matter, but when he pursued Lee County as to when that would be he was told their paperwork had been lost.

County representatives then asked when their public hearing would be held. If and when a hearing is scheduled, Haymans said, he expected it to be in late summer or early fall.

When that hearing is announced neighbors within a few hundred feet of the road will be contacted by mail. “If your question was, ‘What are you doing having this in the summer when no one is here?,’ that wasn’t our intention at all,” Haymans said.

One woman said it was difficult to make an informed decision without the knowledge of how our county commissioner feels, Haymans responded.

“The county commissioner for this area doesn’t even know this project is going on, really,” he said. “The legislative body established this community planning meeting process and requirement, but they didn’t require that anyone from lee county be here. This is just a community meeting. “If the process doesn’t work for you, I’m sorry. This is what we were dealt.”

Another person questioned why the variance meeting was being held when the road in question is still the topic of a pending lawsuit.

“That suit does not freeze the process, Lee County is not a party to that lawsuit,” he said. “There have been developments, some favorable and others not so favorable. This process runs right along – separate, not connected – to that. We’ve done SWFWMD permitting already, we’ve had to buy mitigation credits that have already been contracted for and paid for –not completely – but hopefully we will pay for them when we have some favorable results along the way … but there’s been significant effort on the environmental side of it. Now we’re just dealing with the land use side of it, dealing with setbacks and buffers. (The rules) require a buffer of 25 feet, we just can’t meet that. We are putting in buffering material where we can put it, as well as a wall to supplement the buffer to keep immediate neighbors from it.”

The public information and the project itself will be considered null and void, Haymans said, if they lose the suit.

“If the lawsuit is still pending, or if is lost, all this will be for naught and there won’t be a shovel turned on this road,” he said. “We’re moving forward with the hopes and expectation it will be resolved favorably, but there is no guarantee.”

Haymans then went back to the isthmus conversation, and explained the history from his perspective.

“There was a minor isthmus at the time when Sunset (Realty) tried to put access through there,” he said. “Over time there has been an accretion that has slowly and imperceptively that isthmus has grown … because of the movement of sand, erosion and accretion happen and takes away from some places and gives to others. This was always connected to Boca Grande Isles, all the time. When it was platted for human habitation there was a connection … this connection always existed.”

This all began in 1958 when Sunset Realty bought all submerged land between Boca Grande Isles and Three Sisters.

When the Intracoastal Waterway was being dredged the company asked the Army Corp of Engineers to dump their spoil on three little islands which are now known as one – Three Sisters, with the obvious hope they could connect their newest land acquisitions together one day.

They also filled in Hoagan’s Key, which is twice as big now as it was then. In 1979 Sunset Realty applied for a permit to create the road and they were denied. They altered their plan, but were still denied.

The U.S. Army Corps denied the request then. In 1980 the Department of Environmental Regulation issued notice of its intent to deny the application. Many locals – as well as photo documentation – confirm the fact that the isthmus between the two islands was, quite literally, created overnight.

One fishing captain said he went out one night to fish and took that route like he always had. When he set for home hours later he ran aground on what he called “drag line skids,” which are bundles of creosote lumber approximately 24 x 30 x 30 feet, and are used as temporary throughways.

Several other locals who fished and boated those waters at that time all agreed to those facts in separate statements, giving the same information. Haymans said allowing access to the island would be beneficial to Boca Grande Isles because the number of lots on Three Sisters could be reduced if the variances they requested were granted.

“This is not a pristine island that we’re ruining by developing this, it’s a manmade piece of land bought from the state by sunset with the thought it would eventually be a habitat for humans,” he said. “But we got litigated. Boca Grande Isles was successful in keeping there from being a ‘Way of Necessity’ established. Legislation changed, owners thought they would try it again. Litigation ensued and ended in favor of Boca Grande isles. Then changes in the administration of Boca Grande Isles finally came with this negotiated solution to allow this for consideration.”

Most of the people in the Isles voted in favor of this, he said, but a couple of them did not.

The owners of Lot 99 did not, and they are in litigation with them because of it.

Currently there are 14 buildable lots on Three Sisters, with three of them being privately owned; a company called 5F owns the rest.

Haymans said if this issue is resolved they will combine those remaining 11 lots into six.

Sharpe explained, “This roadway will put fewer people on the island, but theyll be there more often. If people think it’s going to stay empty, we have a Plan B that includes water access, and we will build. Plus, there will be a very large house put on lot 99 that probably won’t have the same buffer restrictions we have here. It’s not an issue of whether it will be built, but how many houses will be out there and how access will occur.”

For a complete timeline of the Three Sisters/Boca Grande Isles controversy see the July/August issue of Gasparilla Magazine.