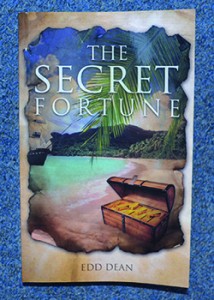 The fictional book is about Boca Grande and a powerful secret going back 500 years, telling a story that leads to the present time.

The book is inspired by decades of adventures Dean has experienced while traveling around various countries, among them Spain, Italy, Cuba and Haiti.

The story describes two very unusual Florida- and Georgia-born characters called “Florida Crackers,” who just happen upon a bit of information that leads them to a small, Catalan Spanish town with an important connection to Boca Grande.

A battle between “Florida Crackers” and northern “Yankees” takes readers along on a journey that leads to a very imaginative and crafty ending.

The characters are fictitious, and the writer’s intention is to be satirical and humorous.

“I take life experiences and turn the people I meet into characters to tell a story,” Dean said.

It took Dean 30 days to write the story, and he spent about three months making changes and corrections to the book.

He said he did not use a proofreader and created the idea for the cover himself.

Dean admits there is quite a bit of satire throughout the book, from the preface all the way to the comments from the author at the end.

“Maybe the air was a little too thin at my home in North Carolina, which is 5,000 feet up. Perhaps I wasn’t getting enough oxygen while I was writing it,” he joked.

The author has personally worked at or visited every destination mentioned in the book, drawing inspiration for the characters created along with the journey they take.

The book is dedicated to Dean’s six-year-old grandson, James Whitfield Warren, who enjoys hearing stories about pirates and hunting for treasures, which is a hint at the main story line.

“Whit” is also a prominent character in the book, a character the author created to give reference to his grandson, to whom he dedicated the book.

Published by in 2015, “The Secret Fortune” is currently available at Boca Grande Real Estate, next to the post office on the island.

You can also purchase a copy directly from the author by emailing him at bocabeandean@gmail.com or call 964-0693.