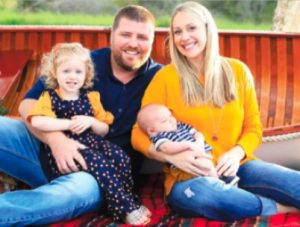 Lauren Hanrahan once taught kindergarten at The Island School. Now she teaches third grade at Englewood Elementary School. She has a three-year-old daughter and a 7-month-old son, and she recently returned to school after maternity leave, but she also received some serious news from the doctor at that time.

Lauren was diagnosed with neurofibromatosis, type 2 (NF2), a hereditary condition most commonly associated with bilateral vestibular schwannomas, also known as acoustic neuromas. These are benign (noncancerous) tumors that occur on the nerves for balance and hearing leading to the inner ear. There is currently no cure.

Lauren said that when she heard about a nonprofit organization called NF2 BioSolutions, which is researching gene therapy to treat the rare disease, she become a little more hopeful about her situation.

“I was in complete shock after the diagnosis,” Lauren said. “It was a huge, life-changing event, and I had some very dark thoughts.”

Lauren currently has two tumors located in her left and right ear, and three along her spine. Since the diagnosis, she has lost complete hearing in her left ear and is afraid of how soon it might hit the right ear. The tumors are pressing along the nerves of her ear and brainstem, which is what the doctors are monitoring closely.

She’s made it a mission to spread awareness about the rare disease.

“I’ve been healthy all my life. It can affect anybody, and there is still so much not known about the disease.”

Friend and fellow teacher Stephanie Ham has created a video on Facebook entitled “100 Acts of Kindness.” She is asking people to re-tweet the video with the intention that it will eventually get the attention of Ellen DeGeneres, the talk show host known for spreading awareness about unusual issues and awarding prizes for random acts of kindness and other good deeds.

“The video has gone viral,” Ham said. “It has had almost 14,400 views on Facebook and almost 9,000 on Twitter … Lauren and I have heard from people all over the world: Israel, Malaysia, Australia and throughout the United States.”

Stephanie said when she heard Lauren say that if her hearing goes completely, the last thing she wanted to hear was the sound of her children’s voices, that’s what really inspired her to do the video.

“That really touched my heart, and I had to do something to help spread awareness so more research is done for people who are diagnosed with it.”

Two fundraisers are scheduled in Englewood to help raise funds for future research.

Lauren has many connections to the island. She grew up in Englewood and spent countless weekends with family and friends in Boca Grande. Her dad has worked at Grande Aire for many years.

Newer PostKids’ Drama Club to perform this evening, May 10
Older PostPlay golf and support the Lemon Bay Manta Rays at the same time