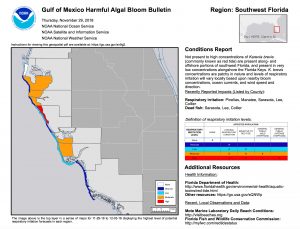 As I type this on a Wednesday morning, it’s a brisk 58 degrees outside at 11:30 a.m. The wind is howling through the pillars down below my “porch” office at the Beacon that sticks out over the sidewalk. As someone with breathing problems, that cool north wind usually means trouble, and today is no exception. As of last night I had to break out the albuterol nebulizer, but hopefully not for long.

Yes, Virginia, we do have red tide … and it has been in our hearts all the year long (and then some). This feeling isn’t joy, though, it’s confusion. It’s annoyance. It’s fear. We want to know when this will end, even though most of us know there is no clear answer to that question.

In case you hadn’t noticed, the voices are getting quieter. Even as more and more dolphins are found dead on Southwest Florida beaches, even as the offshore charter guides run mile after mile after mile through red tide stench: It’s as far out right now as 25 miles right now. When the election was over earlier this month, the people who were protesting our lack of red tide answers from the experts who are supposed to be able to tell us something … anything … all seemed to shamble away into their own worlds where some are still mumbling to this day.

But it’s not the roar of dissension that it once was. And some of us are still coughing and having headaches, and still living with sinus infections. The voices have dulled to a murmering roar as we all sit back and wait to see which scientist will come up with new information, or if we will wake up one morning and the water will be clear and healthy again.

Here’s what I can tell you from my perspective as a breathing-disabled individual. The “red tide” bloom we had that started in the fall of 2017 did not bother my breathing as much as most blooms do. If I was on the beach during the thick of it I would experience symptoms, it’s true. But it wasn’t the same as the traditional red tide symptoms I have done battle with for more than 10 years.

When there was a lull in the stench and water discoloration for a few weeks in early November we all started to breathe a sigh of relief, but then it started up again. This time, though, it was more like traditional red tide. My lungs told me the same thing. I heard people using those exact words, “more like normal red tide.”

For months people were arguing endlessly on social media about whether or not red tide was affecting our area. The problem is, two people could walk down the same stretch of beach and not experience the same thing. Two fishing boats could go out to the same spot and come back with two different fishing reports. Some people simply aren’t affected by red tide, while others are very, very sensitive, and this made for bad bedfellows on red tide discussion pages.

People email and message me all the time on the Beacon Facebook page, asking if they should come down and chance the red tide. My answer to them is based upon current NOAA/FWC red tide reports, and reports from the locals. The bottom line, I tell them, is if they’ve been in red tide before and not had any issues, the fishing is great around here. If they have breathing problems, they should reconsider. I’m tired of telling people this, I can tell you that. I’m tired of worrying about whether someone will have a health problem from coming here. An atmosphere that is fine for one set of lungs is seriously detrimental to another pair.

My friends who fish for a living are catching (and releasing) by the truckload. Red tide or not, the fishing is good (there is no more explanation for that than there is for the recent never-ending algae bloom we have had). Your favorite shops and restaurants are still open, there are still people on the streets and the rentals on the island are full. Business is still being conducted, vacations are still being taken.

I think we all know we need to clean up our act when it comes to what we’re dumping in our water. For as many sources of water toxins that there are in our state, there are that many solutions to cleaning it up. It starts with us, as citizens, doing our part to make changes and by making sure our politicians follow suit with the big corporations.

Someone said to me recently, “Maybe this is like a forest fire of the Gulf … maybe for some reason this was all needed in nature to make it work.” It’s an interesting thought, and one that can’t be carelessly discarded. We can look back at records from hundreds of years ago showing red tide blooms that went on for 18 months, 24 months, even longer. NOAA has records from 1945-48 showing a big bloom that came and went for almost those whole three years.  So without the being who created the planet sending a messenger with some new stone tablets that contain the answers about red tide, we can speculate all day long and still have nothing.

It’s easy to blame the scientists for not knowing, or the phosphate companies and big pharma and big sugar and big mouse ears, for that matter. But placing blame is only a temporary diversion to the real question that is getting louder and louder in our heads: When will our water be healthy again? When will it be back to the way it once was? Is this the new “normal?”

I don’t think it is. I think this was something that happened in such a jarring manner, it made us sit up and take notice. We have learned from this, there is no question. Maybe it was the wake-up call we needed to keep our scientists funded, our government held accountable, and for each of us to educate ourselves about a very real problem. Like parents watching their child recover from a drug or alcohol overdose in the emergency room, we watch our water and wait to see signs of improvement; and we promise ourselves we will keep watching for the signs more closely in the future that something is wrong. Let’s hope when our water is beautiful and blue again in the near future that we don’t ever forget this.