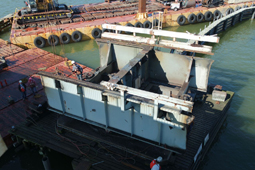 ■ BY MARCY SHORTUSE – On Friday, Feb. 12 the last piece of steel was removed from the old swing bridge, and with it a significant piece of Gasparilla Island’s history turned into lore. According to Gasparilla Island Bridge Authority Executive Director Kathy Banson-Verrico they will still be breaking up concrete, taking out pilings and taking down the old bridge house for another month or more, but fully breaking the old bridge expanse was very important.

In order to fully understand the impact of the recent removal of the last vestiges of the original Boca Grande Causeway, one has to go all the way back to 1924, when a Lee County Commissioner got “tentative approval” from the state to build a bridge to Gasparilla Island. While construction on the proposed bridge didn’t actually begin until 1952, “to bridge, or not to bridge” was a controversy that came up frequently in cocktail party conversation.

In fact, some of the island’s founders, including Peter Bradley, were not thrilled at all with the idea of building a bridge to our little piece of paradise. That is part of the reason the original idea in the 1920s was never pursued but money, of course, was one of the biggest factors.

It was Joe Spadero, the creator and builder of the old Boca Grande Hotel, which used to be just south of 1st Street, who relentlessly pursued the idea of building a bridge for obvious reasons – he wanted more patrons at his hotel. His attitude did not set well with state officials, which is possibly why he spent more than 25 years of his life trying to see the Boca Grande Causeway become a reality.

Finally in 1952 the State of Florida made a deal with Spadero and his partner, Robert Baynard. State officials told the pair if they put up the money for the bridge, they would be allowed a 50-year franchise and to keep the toll money.

The bridge officially opened on July 4, 1958 and the toll was .75 for a car and driver, and .10 additional for each passenger. When the car ferries shut down they were charging $5 for each car delivered, so this still seemed like a pretty good deal.

According to official records documented by bridge historian Don Carroll, the toll revenue from 1959 was about $120,000. The toll remained at .75 until 1978, when it changed to $1.50 for the car and driver, and .20 for each additional passenger.

Spadero tried many times to get Charlotte County to purchase the bridge system. In 1961 they offered a sale price of $1.4 million. In 1965 Spadero tried again with a figure of $1.8 million, and again in 1978 for $2.5 million. Charlotte County authorities seemed gun shy of the purchase, particularly because they were afraid of the cost of upkeep.

Indeed, the bridge was beginning to show signs of failure when a company called Gaspar, Inc. in 1983 purchased it. Sometimes the swing wouldn’t open, sometimes it wouldn’t close, and many islanders doubted the company’s tenacity in sparing no expense to fix important issues.

Carroll was part of a group that included former Gasparilla Inn & Club owner Bayard Sharp who brainstormed to create the Gasparilla Island Bridge Authority. After jumping through a few years of legal hoops, a group of very important men from Boca Grande took a chartered plane to Tallahassee to explain their idea. The group included Sharp, Dr. Hank Wright, John Heffernan, Attorney Guy Batsel, Steve Seidensticker and Carroll. After clearing the project with the state, the group then had to convince Charlotte and Lee County Commissioners it was a good idea. When they finally got the “go ahead” from the counties, it was back to the state level to show they had done their homework.

To make a long story short, after three years of working the system the Gasparilla Island Bridge Authority was created by the State of Florida in 1998. GIBA bought off Gaspar Inc. by paying them what was considered a fair amount, and they began to look at what they needed to do to make the bridges safe and functional again. What started off as a potential $2 million project quickly turned into a $5 million project, but that was the amount necessary to do the construction that needed to be done.

Carroll is quoted as saying, “As I look back on the history of the bridge, I am amazed how lucky we were and how many times events happened that might have prevented us from owning our own bridge … all of those amazing coincidences results in the island’s residents owning the bridge.”

Newer PostEditorial: A tribute to a great man
Older PostYou might see a mermaid downtown …