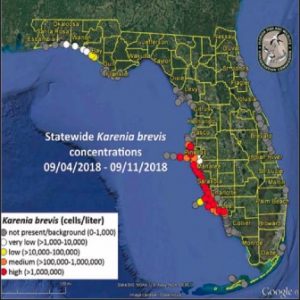 A bloom of the Florida red tide organism, Karenia brevis, persists in Southwest Florida and extends from northern Pinellas to Lee counties along 125 miles of coastline. Aerial surveys conducted on Sept. 6 and Sept. 11 as well as recent water sampling indicate that the bloom of K. brevis still extends offshore (10 miles or more) in some areas. A bloom of K. brevis was also observed in Northwest Florida for the first time this past week.