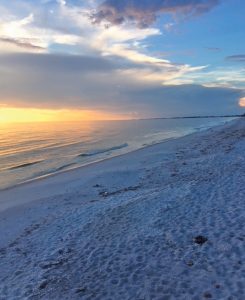 Coughing and sneezing due to red tide is annoying enough … but as dead fish piled up on island beaches this week, the stench in the air certainly added to the unpleasantness. One thing is for sure, you have the beaches pretty much to yourself now.

Boca Grande continues to be affected by red tide, according to the National Weather Service in Tampa.

On Monday, June 25 the NWS issued a beach hazards statement for red tide effective through Thursday evening. The report stated: “Possible respiratory irritation would be an issue in some coastal areas. Symptoms could include coughing, sneezing and tearing eyes. People with respiratory conditions such as asthma, emphysema and other pulmonary diseases may be more sensitive. Irritation may vary locally and throughout the day. If you experience uncomfortable symptoms, consider going to an unaffected beach.”

Dr. Jim Locascio, a marine scientist with Mote Marine Laboratory in Sarasota, is asking for volunteers to walk the beach and document what kinds of dead fish they are seeing, count them and report where and when they were spotted.

“This information will be very valuable looking ahead to compare to when future blooms occur,” Locascio said.

He has gotten some feedback this week from residents on Little Gasparilla Island, and a few from Boca Grande.

People have reported that small and large snook, frogfish, crabs and even several goliath grouper had washed up onto the beach. One manatee was also found dead at the south end of the island.

Locascio said this was very unfortunate, because many species are currently approaching the peak of breeding season, and this will greatly affect our fishery in the future. Spawning lasts from May through September, and he’ll be doing some sampling in the fall to record the number of fish that return to our water.

He hopes the numbers will be useful in the future for research purposes.

“Snook is a very valuable, well-managed fish, and now we have what appears to be thousands wiped out, so this is very serious,” he said. “There is no way to tell how many were affected and how many managed to escape. We do have some old data to compare; that’s why I want more people to report the fish on the beach. The more data we can collect, the more knowledge we’ll have in the future.”

Will the species affected recover?

“But it’s not a natural kill, it is more complicated,” he said. “We do have elevated red tide, and the fish kill is associated with it, most certainly. It follows a period of heavy rainfall, run-off and a high discharge from Lake Okeechobee. A directed effort to understand the factors responsible for this event is needed, so that we can understand the difference between natural variability and what is human- induced.”

The scientist said the future of the fishery is going to take a “big hit.”

Red tide releases a toxic algal bloom that’s a higher-than-normal concentration of microscopic algae (plantlike organisms) in the water that is deadly to wildlife. The toxin is then released into the air. A natural occurrence, the bloom can occur as a result of various conditions, making it nearly impossible to predict a bloom. Winds and currents drive red tide ashore. Toxins generally are released when the delicate algal cells break up due to wave action. When the counts are in the millions per liter, the water can turn reddish-brown.

If you have asthma or something like COPD, you’re going to be more susceptible to the toxins.

Florida Healthy Beaches reported that most people can swim in the water where red tide has been detected, yet it can cause skin and throat irritation and burning of the eyes. If you swallow the water, you could experience gastrointestinal distress. If you have a compromised immune system or open sores, you should not be swimming in this water. You can report any health-related issues to www.floridahealth.gov.

Charlotte County Communications Manager Brian Gleason said the County is monitoring the dead fish situation, and no decision has been made on clearing private beaches at press time.

Lee County is providing a waste receptacle from June 29 to July 2 at the west end of 7th Street in Boca Grande to dispose of dead fish carcasses related to the red tide. Plastic bags and latex gloves can be picked up outside the Parks and Recreation office at the Boca Grande Community Center, 131 1st Street W. starting Friday, June 29. Place all fish in plastic bags and put them in the receptacle.

“We’re doing this to obtain new data streams while empowering the public and putting the reporting in their hands,” said Dr. Tracy Fanara, manager of Mote’s Environmental Health Program. “We care about public health and enjoyment of Florida’s ecosystems.”

Fanara worked with Dr. Vincent Lovko, manager of Mote’s Phytoplankton Ecology Program, and web development contractors at Function on Phones to create the CSIC app. The concept for the app was informed by a project completed by a former Mote intern and through discussion with collaborators from the Harmful Algal Bloom (HAB) group at the Florida Fish and Wildlife Conservation Commission-Fish and Wildlife Research Institute (FWC-FWRI).

The new CSIC app — available for iOS and Android phones — is designed to enhance and complement existing red tide resources for the public.

Similar to Mote’s beach volunteers, the general public can use the CSIC app to share their observations of conditions potentially related to red tide, increasing rapid transfer of spatially linked information.

Fanara and Lovko are currently working on a study that may provide a natural solution to controlling red tide and alleviating its effects.

They have created a mini-reef in a laboratory with three tanks holding biofilters such as sea squirts, tubeworms and other tiny marine invertebrate animals.

Red tide is different from algal blooms in lakes, which are fueled by nutrients and fertilizers, pesticides and herbicides.

Lovko said this research project could help scientists understand if blooms can be prevented in confined systems.

The goal in the future is to have citizen scientists implant these mini-reefs into canal systems and see how many algae they remove. Since the canals are concrete-lined, they replace the natural habitat of marsh and filter feeders that live on blades of sea grass.

But the study is still in the pilot process. “Our desire is to see if these organisms can reduce red tide in these confined systems,” Lovko said. “It’s definitely in the early stages, but we’re hopeful that these biofilter feeders can help reduce the toxins. Or will it kill off the filter feeders because their systems are filled with these particles?”

For questions, concerns or help with troubleshooting the CSIS app, send an email to info@mote.org with “app feedback” in the subject line.

You can report data from the current fish kill to Dr. Locascio by sending him an email at locascio@mote.org.

Newer PostResearch shows bad blooms back to the 1800s, so the question is … Are we really feeding the red monster?
Older PostGIBA discusses petition to change name of Causeway