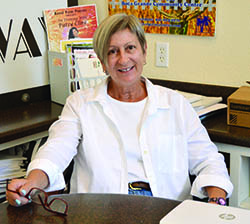 BY SUSAN ERWIN – The Royal Palm Players are sure to put on plenty of amazing shows this season as Meryl Shaffer, the energetic new art director, has been keeping busy planning for an outstanding year to come.

Meryl has an extensive background in theater and art management.

She graduated from The Catholic University of America in Washington, D.C., where she studied speech, drama and directing.

In college, she worked with the props crew and as an electrician at several shows.

After working on a production at Arena Stage in Washington, D.C., she transferred to Broadway to become a production stage manager for various venues in New York City. She enjoyed working behind the scenes as a technical assistant and assistant stage manager.

She spent years in New York working in off-Broadway places like the Manhattan Theater Club and the West Side Arts Theater.

She met her husband, JeanPaul Jenack, in New York when she was working with an arts group for children called Equity Theater for Young Audiences.

He was doing the casting for a Pepsi commercial at the time.

JeanPaul spent much of his childhood touring with European circuses. He learned to ride the unicycle when he was four years old.

The commercial he was casting for required children with circus experience, and someone told him to call Meryl.

“He was hired as a technical assistant for anyone who needed specialty acts. He was looking for performers who knew how to juggle and ride unicycles – and ironically, I had just cast 20 kids with those skills,” she said.

They founded a company in 1984 called The National Circus Project in Westbury, New York.

It was a nonprofit arts-in-education program teaching the art of circus performing to kids in public schools.

“We would team up with international artists, and they’d work with the kids in the schools. It was a really fun program, and we were the only ones offering that kind of experience at the time,” she said.

The company has since grown and is still operating in the northeast.

Meryl and JeanPaul moved to Don Pedro Island in 2000. Her in-laws had moved to Englewood many years ago, and after coming down to visit regularly, they decided to look for a winter home.

“We searched for places every year. We made friends with real estate agents, and we’d check out listings every winter,” she said.

Years later, her mother-in-law became ill and said she was ready to sell her home in Englewood. So Meryl and JeanPaul came down to pack up the house and looked at more than 100 homes for sale in the area during that time. They took the barge over to Palm Island to look at a listing. The home was exactly what they were hoping for … but it already had an offer. Their real estate broker advised them to put in a backup offer. The broker called a few days later with good news. The financing had fallen through for the first bidder, and the owner accepted their backup offer.

The first year they came down and stayed a month. The second year they stayed 13 weeks. The third year, Meryl didn’t want to go back up north. They now reside in Florida year round.

Meryl’s neighbor, Sally B. Johnson, was and still is an acting coach and teacher in New York City.

“She and I shared common interests, and she told me about a reading she was doing with a small theater group in Boca Grande. I went with her to the reading, and I was hooked,” Meryl said.

A few years ago, she started volunteering as a stage manager for Royal Palm Players.

“The first show I did was called ‘Snapshots,’ directed by Tad Ingram. He was great to work with, and I really enjoyed that experience,” she said.

The next year she received a call to come back as stage manager for several more productions.

She managed “Love Lost” and “Lend Me a Tenor” and then directed “12 Angry Jurors.”

“That was a great show. It was a mixed-gender version of ‘12 Angry Men,’ and it was a blast,” she said. “I guess I must have done a good job, because they asked me to come back again last season,” she said.

Throughout her career, Meryl has guided a variety of performances as director and stage manager. She explained the difference in the titles, saying that a stage manager acts as the director’s right hand. The director creates a vision of how the show should look and sound and makes all of the creative decisions. The stage manager makes sure everything happens when it should.

“I personally like the back stage of the theater and watching the whole production come together. It’s incredibly rewarding and very exciting. It’s a complete team project. Everybody depends on everybody else because it’s live. You never know what is going to happen. It’s a high-adrenaline environment, and it’s so much fun,” Meryl said.

Her mom and dad moved to the area in 2000. Both are big theater fans.

“They’ve been to every show I’ve directed, and they’re looking forward to seeing ‘Guys and Dolls’ this season,” she said.

Two years ago, Meryl’s brother Andy and his wife Mary bought a house in Englewood. They have two sons, and the older one just got married two years ago.

“We took my mom and dad up to New York for the wedding. Andy and Mary have a baby now, and they’re coming down for Thanksgiving,” she said.

Her brother worked in the film industry for many years.

“It’s kind of funny when you think about it, because my dad was a pharmacist and my mother was a biologist, and here their children ended up in the arts,” she said.

Meryl is always ready to work with new volunteers, even those without any prior experience.

“I think it’s exciting to teach new people and get them excited about working behind the scenes. Not everyone is cut out for acting, but there is so much more than that. We have a costume committee and a props committee, and we always need help with set decorations. Anybody who shares our passion for theater is always welcome here.”

She said she’s excited to be here and to remain involved in theater – especially in such a wonderful community.

“It’s been interesting to watch the evolution of RPP over the past few years. I always thought this was the sweetest community theater. It’s ideal, because the people are so active and passionate.”

She said she does not necessarily want to make RPP bigger, just better by tightening up the quality of the productions. And she’s excited to say that RPP ticket sales overall are doing very well this year.

“Shows are selling out quickly, and many people are buying in advance this year,” she said.

Theater members are excited about the upcoming performance of “The Odd Couple” scheduled to open in February.

“This is a big event for us. We’re going to be doing both versions – a male and a female cast will perform two shows in repertory – which means there’ll be a male version one night and a female version the next. We alternate for eight shows,” she said.

And here’s a bonus: If you buy a season ticket before November 10, you’ll receive a ticket to the other version of “The Odd Couple” for free.

Meryl and JeanPaul have no children and no pets. When she is not working, Meryl enjoys daily walks on the beach and practicing Shorinju Ryu-style karate. She presently holds the rank of 2nd degree black belt.