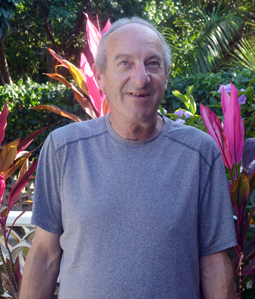 Mike Weddle has been alluring people onto the dance floor performing live roll and roll music in Boca Grande for nearly 20 years.

Mike has been the lead singer and rhythm guitarist in the Boca Bande since 1997. He is the only original member of the band of five that regular entertains all around the island. The group has performed at countless weddings held in Boca Grande and many New Year’s Eve parties on the island.

Last year was the first year in two decades they didn’t play at a show on New Year’s Eve. And friends of the band members made sure that wouldn’t happen this year. They started planning a New Year’s Eve gala last winter, and the group will be performing at the Crowninshield Community House starting at 9:30 p.m. tomorrow night, New Year’s Eve.

Mike grew up in Los Angeles, CA and after graduating high school, he moved to Maine.

“I had friends in California who were from Maine, and originally, I was just supposed to go for one summer. But I loved it there so much I ended up staying,” he said.

Since then, the passion of his life has been making music. He played drums and guitar and sang in several bands over the years. Then he met a friend in Maine who worked at The Gasparilla Inn & Club in Boca Grande. One winter, Mike heard there was a vacancy there, and since there was so much snow up north at the time, he decided Florida sounded like a pretty good deal. So he came down and worked for one season the kitchen.

“I started out as a glass washer and then they moved me to food prep,” he said. Then he worked in the golf pro shop for the next several years. He would return to Maine for the summer months and focus on his music, and come back to Boca Grande every October.

“It was fantastic. It was one of the best jobs I’ve ever had. The golf privileges alone were a huge perk, and room and board were included. It was great,” he said.

Mike said he enjoyed getting to know a lot of the old time residents, many of which are now deceased. He met several musicians here, and a few of them eventually formed a band and starting playing at venues around the island.

“We used to play at the old Beach Club. They would have a big steak roast every year. The locals, all the employees and the guests would get together at the beach. It didn’t matter who you were or where you came friend; everybody had a good time together. Everyone was welcome,” he said.

When he first came to the island in 1975, he said it was like a ghost town. That made him curious to learn about the history of the island.

“I’m glad I was here then, and had the chance to see what it was like before it got more popular,” he said.

Mike moved to Florida full time during the 1990s. He was instrumental in forming the five-member Boca Grande almost 20 years ago.

“We first put the band together with “No Way Ray” (who has since passed away) and our original guitar player moved to Nashville.”

The band’s current keyboard player lives in Tampa. The drummer is the newest member of the band who’s been with the group for the past eight years.

“I’m extremely luck to have this group of talented musicians. Most bands break-up because of egos, jobs, relationships … but we’re all in the same mindset. We’ve been in other bands before, and we’re all in it because we love music. I’m 62 and I have a rock band. It doesn’t get any better,” Mike said.

The Boca Bande plays dance music from the 1950s through current hits. They have gigs on the island on most weekends. They’ve played all over Florida, mainly because people who originally saw them here asked them to play at other locations. “I always say we play everything from Buddy Holly to the Black Eyed Peas. We also play some funk and some country and we’ll throw in a few surprises – we just try to keep the people dancing,” Mike said. Mike played drums when he was younger, but he said when you sing and play drums, you’re usually hidden near the back of the stage. So when the former guitar player left the group, he took over.

Mike started a business called AVID (Audio Video Interior Design) in 1997. Since he worked behind the scenes setting up electronic equipment for the band, the business was a natural transition for him. He mainly diagnoses problems with computer systems and installs video, networks and telephone systems. Although he has done some commercial work, he said 99 percent of his clients are on the island.

“I’m very lucky because I love being in Boca Grande and I have very good clients here.”

Through the years, Mike said he has met quite a few close friends, as the island has grown more popular.

“This island attracts a lot of unique individuals,” he said. Mike occasionally travels back to Maine, and has even brought the Boca Bande with him to perform shows up north. “A good friend of ours has a large piece of property up there and he used to have a party every year so we’d go up and play,” he said.

Mike met his beautiful wife, Belqui, in Englewood. They were married at the Crowninshield House in 2000. They have one cat, Oreo, they rescued. The cat’s former owners were Mike’s neighbors. They moved out and left Oreo to fend for herself.

“We kept seeing this cat around and then she started hanging around the house … and all of a sudden we had a cat. She found us,” Mike said. Mike and Belqui are looking to adopt a smaller, older dog in the future whose owner can no longer car for it.

He doesn’t have much free time between running his business and playing in the band. The Boca Bande members are currently working on a project through the crowd funding website Kickstarter.com. They want to create a documentary recording the process of taking an original bare-bones song and producing it in a studio. Band members are working on creating an new CD filled with original songs.

“It’s a rare thing for a band to stay together for as long as we have. And we’d like to show people how you can turn an idea into a song and watch it morph into something completely different by the time you are finished with it during the collaborative process,” Mike said.

For every donation to the project, donors will receive something back like a download of an original song or a T-shirt, depending on the amount given.

“We have a 90-day window to achieve our goal. We’ll also have a live streaming webcast available. And these are all unreleased, original new songs,” Mike said. Island photographer Skip Perry created and produced the demo video for the project and he’ll be producing the video documentary.

To support the project, visit kickstarter.com and search for the Boca Bande. You can also find their latest schedule of performances posted on Facebook.