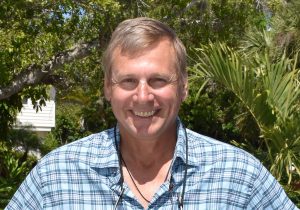 Mark Masselink has visited Boca Grande every year since the late 1990s. He’d travel here annually with a group of friends to go tarpon fishing in Captiva and Sanibel islands, and eventually they discovered Boca Grande.

“I loved Boca Grande as soon as I got here,” Mark said. “The other guys on the fishing trip thought it was a little sleepy, but I just loved it immediately.”

After the trip, he returned home and explained to his wife Priscilla how much be enjoyed Boca Grande, and he asked her to come down at the end of the next year’s fishing trip so she could explore the island with him.

“We timed it so when I went to drop my friends off at the airport, I picked her up the same day and we drove back to Boca Grande,” he said. “It happened to be our anniversary that weekend, so it was a trip we’ll never forget.”

They rented a room at The Gasparilla Inn for a few days and decided right away that they wanted to eventually buy a home on the island. They purchased a place in Boca Bay when Mark retired in 2012, and recently they had a home built on 1st Street.

“Many of our friends still live in Boca Bay, and many of our social activities are still with people we met during our first few years on the island,” Mark said.

Mark grew up in St. Louis, Missouri. After graduating from high school, he studied economics and history at Duke University in North Carolina, where he met Priscilla. It’s

actually a cute story, how they met. Mark’s roommate was infatuated with Priscilla, and repeatedly tried to ask her out. But when Mark met her at a party one evening, there was a strong connection, and she chose Mark over the roommate.

Just after graduating from college, Priscilla was offered a job in Switzerland, but Mark didn’t want to say goodbye, so he went to Switzerland at the end of the summer to try to find a job in Zermatt, where she was working.

But it wasn’t easy.

“The Swiss are very particular about giving work permits to people who are just passing through the country,” Mark said. “You have to get a job, and then get a work permit sent to you from outside of the country.”

Luckily, a worker from Yugoslavia didn’t show up, and Mark happened to be at the right place at the right time. He asked if there were any jobs available at a ski resort. The hiring manager said there was a position open, but in order to start working, Mark had to leave the country and go to Italy and wait for the work permit to be mailed to him.

“It worked out perfect, because Priscilla and I both worked in the evening, so we could ski during the day.”

They worked and played in Switzerland for a year and then backpacked their way through Europe and returned to St. Louis.

“It was a great way to spend a year after college,” Mark said. “Before we were married we went back to St. Louis, thinking that’s where we wanted to make our home, but it turned out we wanted to live in a smaller town.”

Mark worked in the real estate field for a few years and then continued his education at the University of Chicago. After he finished the MBA program, he worked for NC&B Bank in Charlotte, North Carolina. Over time, it became Bank of America.

They decided Charlotte was too small a town to make a successful career, so Mark took a job in New York City as a financial trader.

He traded government bonds and money market instruments. The bank he worked for has since been merged out of existence into various other European banks.

As Mark’s career continued to advance, he went on to trade securities for several hedge fund accounts in New York City, until he retired in 2012.

He said technology changed the trading industry immensely, and now most of it is done using computers.

“Instead of people talking with each other, now it’s computers talking to other computers and making trades 24 hours a day.”

He enjoys playing golf, tennis, croquet and boating. He also likes to cook and entertain.

He’s most recently gotten involved with the Royal Palm Players.

“Priscilla has been acting since college, so I’ve always watched her plays, and I’ve enjoyed being a member of the audience,” Mark said. “Two years ago, Alice Gorman asked me if I’d consider playing a part in one of the readings for ‘A Trip to Bountiful,’ and I only agreed to try it because she was playing the lead part and she’s such a wonderful person.”

It turns out he really enjoys acting, because he continued on and was in the chorus of “Mame” in 2018. He also had roles in “The Best Man” and “Present Laughter.”

“I’m kind of hooked now, because it is fun, and it’s also interesting to see the play from backstage,” he said.

Mark teaches a weekly chess class to The Island School students at an after-school program at the Community Center. “I was surprised to see how many of the young kids were interested in learning about the game,” he said.

Mark and Priscilla will be celebrating their 38th wedding anniversary this June.

They have three sons – Jack, who lives in Dallas, and Ben and Parker, who both live in Boston.

They all recently visited the island for spring break.

“Parker, our youngest, is a teacher in Boston, so he gets a great vacation package,” Mark said. “He came down for two weeks, and the others came down for a quick weekend family

reunion. We had great weather, and we all enjoyed playing golf and tennis together.”

Mark has become an avid fan of the game of croquet, and he can be seen on the greens at The Gasparilla Inn Croquet Club several days each week.

“It’s really an amazing, complex game,” he said. “It’s almost like a combination of playing chess and pool – but on grass. I’ve really enjoyed meeting the other players, and the more I learn about the game, the more I want to play.”

He said his favorite thing to do in Boca Grande is play tennis with Joe Adrian (the goat herder) and the rest of the “goats” at the Boca Bay Pass Club on Monday nights.

“Sometimes there are more than 24 guys playing, and Joe Adrian organizes it every week,” Mark said. “Without Joe, the events wouldn’t happen. And I always enjoy playing against Dusty – he’s a great guy.”

Mark said when the games are finished, there is a fellowship hour, and players and their wives enjoy beverages and snacks on the balcony by the courts.

“We all socialize together and then we pack up and head home, or sometimes a few of us will go out to dinner.”

Mark and Priscilla will be heading north to their home in Bar Harbor, Maine in June, and they’ll be returning to Boca Grande in the fall.