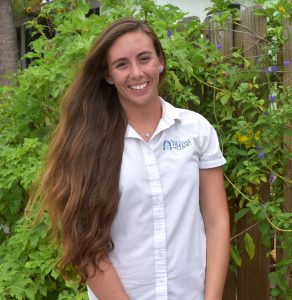 Kelsey Chavarria has had an admiration for Boca Grande for as long as she can remember.

She loves to surf, swim, skateboard, boat and fish. And since she’s been working as a patient representative at the Boca Grande Health Clinic, she’s able to spend even more time on the island.

Her father, Manny, has been working as a bartender at The Boca Grande for the past 30 years.

He met her mom, Debra, while she was working as a waitress at the club. Kelsey spent her early days at the Boca Grande Child Care Center until she started school at Vineland Elementary in Englewood.

Kelsey continued on to L.A. Ainger Middle School and eventually graduated from Lemon Bay High School. She chose to attend the State College of Florida in Venice and earned a bachelor’s degree in health services administration in 2016. Her first job was working as a secretary at a counseling office in North Port.

“It was a new clinic and I was the first employee, so I learned how to do just about everything in regard to running the office,” Kelsey said. “I did billing and scheduling and set up the building certifications.”

She worked at the counseling clinic for more than three years until 2016, when she left to take a job working with autistic clients at a clinic in Venice.

“I worked as a behavioral therapist for about six months,” she said. “It was really interesting work, because I learned how to apply play therapy to clients who were unable to express themselves verbally or emotionally. It was very rewarding, and I learned so much. I’d like to return to that field in an administrative role in the future.”

Then she heard about an opportunity at the Boca Grande Health Clinic for a patient representative. Kelsey had been babysitting the children of her neighbor, Jonna Foos, for several years, and that’s how she learned about the job. Jonna is also a patient representative at the Clinic. She applied for the position, went in for an interview and received a job offer a few weeks later.

“Jonna knew I was going to be graduating with a degree in health administration, and she mentioned there was an opportunity coming up soon, so she encouraged me to apply for it,” Kelsey said.

Kelsey started working at the Clinic in November, right before graduating from SCF. Some of her job duties at the Clinic include answering phone calls, dealing with clients, handling scheduling and making sure the billing is correct.

“I really like the job, and I’ve always wanted to be able to work on the island,” Kelsey said. “I was awarded a scholarship through the Woman’s Club, so I’m beyond grateful to give back to a community that allowed me to go to school and pursue a career path.”

Her goal is to eventually move up in her position at the Clinic once she earns her master’s degree. She is hoping to start an accelerated program next year. She’s planning on attending Lake Erie College of Osteopathic Medicine in Bradenton to earn a master’s degree in health administration in an 18-month program offered at the school.

When she is not working at the Clinic, Kesley enjoys being outdoors surfing, paddleboarding, cruising around on her long board and going out on the boat to fish with her family. She has yet to catch a tarpon, but it’s on her list of things to do. Strongly focused on staying fit, she takes regular classes at The Ch’i Spot in Englewood. Her favorite is an intensive bar class that includes a combination of pilates and ballet. She also enjoys aerial yoga, TRX and strength training courses.

“I like to keep as active as possible, and the classes offered there are challenging,” she said.

Kelsey ran the Boca Grande 5K in February and placed third in her age group. When she was in high school, she worked as a volunteer at Englewood Elementary School and helped train students in the Rock & Run program to become strong enough to run a 5K.

“We would run different routes every day after school and do strength training, and then I’d go to the 5K events with them on the weekends,” she said.

Kelsey speaks Spanish fluently and has been spending summer vacations with her family in Costa Rica since she was a little girl. Her dad purchased some property there years ago near his family and had a home built on it in 2005.

“I also consider that my home,” she said. “My dad has a large family, so I have a lot of relatives there.”

She’s very much looking forward to going for two weeks in July.

“Last year was my grandma’s 90th birthday, so we had a big party there last summer.”

Kelsey said the weather in Costa Rica is tropical, but the rainy season there is much cooler than in Florida.

“During the nights it drops down into the 50s, so you really don’t need air conditioning,” she said. “My mom helped design the house. It has high windows, and the air circulates around easily and keeps it cool.”

Kelsey has dual citizenship in Costa Rica because her dad was born there. She credits her parents for her high level of motivation.

“My dad came here and learned English on his own and worked at the same job for 30 years to able to provide for our family,” she said. “He always stressed the importance of education, since he wasn’t able to attend college. And my mom is very supportive of me. Both my parents work very hard, and they’re great role models.”

“We make traditional tamales all the time. We wrap them in banana leaves and tie a string around them, so when we’re done it’s like you have little presents,” she said. “It’s almost like an art – at Christmas time it’s a tradition to give them as gifts.”

Kelsey is happy to be working in Boca Grande because she gets to enjoy the island lifestyle more, being here five days a week. She enjoys being able to go to the beach regularly after work for a walk and a swim.

“I love being on the island, and I feel very lucky to be able to work here full time,” she said.

Kelsey has three younger brothers: Lukas, 20, Thomas, 17 and Tristan, 10. She currently lives with her family in Rotonda West.

They share their home with Hanz and Franz, two ducks that her mom bought for Easter and that now refuse to leave the premises of the back yard. Then there is Elvis the parrot, coincidentally named because the bird likes to dance to Elvis music. Elvis shares his cage with a parakeet named Buttercup. They bought Buttercup so Elvis wouldn’t be lonely, and now the two are best friends. And two felines, Batman and girl cat, complete the Chavarria household.

Next time you visit The Island Clinic, look for Kelsey’s smiling face at the front desk.