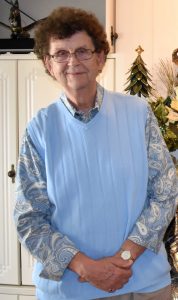 For most of his life, Jim Blaha has been extremely passionate about history. He was a social studies major in college and earned an undergraduate degree from Illinois State in education and history, a master’s degree in history from The University of Illinois, plus 60 more credit hours in the subject from a number of different universities around the country.

Every Saturday, you’ll find Jim and his wife, Rose Marie, greeting guests at the Boca Grande History Center, where they also work to archive thousands of photos, documents and other items into a new computer system that was recently purchased by the organization.

Jim is originally from Berwyn, Illinois, a suburb of Chicago. He met Rose Marie at the beginning of their first year in college. They lived in the dormitories, which didn’t serve food on Sundays, so they both went out with a group of friends to get dinner.

Jim saw a girl he attended high school with and stopped to talk to her, and Rose Marie was with the group.

“I like to say it was hunger that led to us meeting,” Jim said with a smile.

Rose Marie said she and Jim share the same heritage, and the fact that Jim could dance the polka was very important.

They’ve known each other for 62 years, and have been married for 57 years.

“We are each other’s best friend,” Jim said.

Rose Marie has spent time tracing her family’s genealogy, and after doing some research, she discovered that Jim’s family lived in the same small Czech neighborhood where her family lived.

“His parents had their wedding reception where I attended a Czech school” she said.

The most interesting coincidence happened when they went to apply for their first passports and found out they were born at the same hospital and delivered by the same doctor.

“It was destiny that we met,” Jim said.

Jim and Rose Marie started coming to Boca Grande in 1987. They had a timeshare property on Sanibel Island, and they were looking to buy property on the Gulf of Mexico. Jim said they quickly learned the difference between “Gulf-front” and “Gulf-view” properties.

“We wanted to be able to see the water from our kitchen and from the bedroom of our home,” Jim said. “Not just a slice of it by leaning from a balcony.”

They searched and searched, but everything they looked at was either too expensive or not what they wanted.

The Realtor they were working with suggested they check out Boca Grande.

Never having heard of it before, they made their way to the island, and after driving over the middle bridge they knew they wanted to retire here.

They stopped at Seale Realty, described what they were looking for, and went to look at a place at Dunes of Boca. They put in a bid to buy the unit the next day ­– New Year’s Day, 1987.

Still employed as teachers, they would spend the summers in Boca Grande and rented their home out on a very limited basis.

Jim taught a unique 6-week summer school class for high school students where the kids were with him for full days, and during the last two weeks of the class, they would travel by bus and Jim would teach history along the way. He would conduct the class at various historical sites in such cities as Philadelphia, Boston, Washington D.C., Williamsburg, Jamestown and other areas of historical significance.

“I believe if you convey enthusiasm while you’re teaching, the students will follow you,” he said. “I was a department chairman, so I was teaching a few classes per day at one point, and being in class was the best part of my day.”

One of his students became a history teacher and utilized the same interactive travel class that Jim had established.

It was clear Jim loved his career, and Rose Marie was quite surprised when he decided to retire.

He retired from teaching high school in 1993 and started teaching at the College of DuPage in Illinois. He also became a consultant with the Educational Testing Service and a consultant for the teaching of advanced placement courses.

But retirement didn’t last long. After about three months, Jim received a call from a museum asking him to come aboard as the administrator, and he did that for the next eight years.

Jim now applies all of those years of education and experience at the Boca Grande Historical Society and History Center. He is currently a member of the board, and he and Rose Marie have been instrumental in getting the archives digitized in a new archive system.

Dedicated to the collection and preservation of memorabilia, BGHS offers its members and the public numerous ways to become involved in researching our local history. Using the resources of grants, the Society has obtained oral histories from long- time Boca Grande residents to add to the permanent archival collection.

The Blahas have been very active at the History Center for the past two years. They volunteer to run the Center every Saturday from 9 a.m. to 4 p.m.

“I think the History Center has so much potential, and what we’re doing is just a tip of the iceberg,” Jim said. “Hopefully, one day there’ll be a full- time archivist, and that person can take over.”

The current interpretive and interactive exhibit on display at the Center is “Bridge to the Future: The Swing Bridge Comes to Life.” Visitors have the opportunity to come and view some of the original pieces of the swing bridge and learn about how the new bridge was constructed.

The exhibit will change in the fall of 2018 to: “Boca Grande: Once a Railroad and Industrial Town.”

Jim and Rose Marie have one daughter, Lynn, who lives in Naperville, Illinois. They have two grandchildren: Meghan, 25, and Nick, 16.

They also had a son, James Jr., who passed away after an illness five years ago.

The Blahas enjoy traveling all around the world, and they plan

extensive annual land trips and cruises. Their home appears as though it could be a museum. The walls are lined with items they’ve purchased in Europe, Asia and South America.

“We really like to travel. We’ve been fortunate that we’ve been able to visit 100 countries,” Jim said.

Jim and Rose Marie recently booked a trip to Japan in 2018 and Germany in 2019. They’re trying to combine the trip to Germany with a visit to the Czech Republic to spend time with some of Rose Marie’s relatives, and also to look up Jim’s ancestry.

“Blaha is a common Czech name, like Smith or Jones, so there are hundreds of listings under that name when you look at a European phone book,” Jim said.

They went to visit their daughter last March and surprised her for her birthday.

Jim’s favorite quote is by Thomas Jefferson: “He who receives an idea from me, receives instruction himself without lessening mine …”

To learn more about island history, stop by The Boca Grande Historical Society and History Center, located at 170 Park Avenue. Hours are Monday through Saturday from 10 a.m.to 4 p.m.

Newer PostSmart Studio hosting new ‘Wild Florida’ exhibit
Older PostThe flu: It may not be an epidemic, but it sure feels like it is