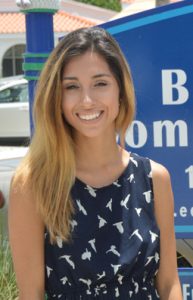 If you haven’t met the newest staff member at the Friends of Boca Grande Community Center, you’ll want to read more about this week’s profile candidate, Jessica Smith.

Jessica, 23, started her position as program assistant at the Community Center in May. She was born in California, but her parents moved to Englewood when she was very young. Her mother wanted to move here, since her father was living in Englewood at the time and was battling an illness.

Jessica has three sisters: Sarah, 21, Ashley, 30 and Veronica, 35. Sarah lives in Venice, Ashley lives in California, and Veronica lives in Port Charlotte. “They’re a whole lot of fun to be around,” Jessica said.

Her parents, Kathy and Gus, live in Englewood. All of girls attended Lemon Bay High School. Jessica was very involved in theater and played several roles in many of the performances. She was a true thespian, involved in all of the productions each year.

“Our class participated in the International Thespian Society in Lincoln, Nebraska, which was a very big thing for a high school program. We performed ‘The Wedding Singer’ at that festival during my senior year. We stayed in the dorms of the college there for the duration of the festival. It was so much fun to be there and perform with friends and meet new people from literally all around the world.”

Aside from theater, she played the saxophone and flute for the jazz band and concert band at the school. She also enjoyed art classes and took as many as her workload allowed. Jessica graduated from Lemon Bay in 2011.

After high school, she moved to Orlando to study computer animation at Full Sail University. “I was really interested in pursuing a degree in art, but it’s really just more of a hobby now,” she said.

She also worked at Disney World for a year while going to school there. While there she held several positions. Starting out she was a ticket taker; she then worked on Main Street in the Magic Kingdom as an attractions attendant and then moved on to do parade control. “I basically did crowd control and walked with the characters down the street to make sure everyone kept moving. It was really fun just being there every day, because for most of the people, this was like a once-in-a-lifetime vacation that they would never forget. It really is the happiest place on earth,” she said. Jessica said an important perk working for Disney was being able to get free tickets for her family and friends.

“I’m a Disney maniac – I love all things Disney – that’s really why I originally got into animation,” she said. But between the accelerated program at Full Sail and working at Disney, she found it was just too much to tackle at the same time. “It was a very fast-paced schedule. I was attending school all day and then trying to work at night. It was just too much,” she said.

After trying to tackle the courses online instead of in the classroom to save time, she still felt like she was sinking. It was just too difficult to try to balance a full schedule while trying to keep up with her two-year-old son, Saylor.

“Going to school full-time when he was so young was rough, and my mom and sisters were all back in Englewood, so I needed to be near my support system,” she said. So after 18 months, she moved back to Englewood.

She worked at a few different places around town and ended up taking a job at the Englewood Event Center, where she did administrative tasks, marketing and graphic design.

“I managed the website and created flyers and designed the programs for the events. It’s really a very nice facility, and the venue can hold a lot of people,” Jessica said. She worked at the Event Center for about two years, and left that position when she was offered her current job at Friends, which she started on May 5.

“I saw this as a really great opportunity. The island is so beautiful and the people I work with are great,” Jessica said.

And so far she seems to be settling in nicely.

Some of the job responsibilities include taking care of all the “up front” duties that come along with putting together the vast array of programs the organization promotes every season. Those can include anything from answering phone calls and email inquiries to selling tickets to events and working on promotional materials.

“Right now I am trying to help out wherever I can and also trying to familiarize myself with the island and the people. I’m really glad I was able to start during the slow season, so I can learn as much as I can before the busy season gets here.”

Jessica said the Community Center staff have been very busy planning the 2016/2017 events and are working on finalizing a lot of the print material for the programs. Although she couldn’t give specifics at the time, she did say there will be a lot of “influential people” who will be coming to the island for the upcoming season.

“It’s very exciting for me, because this is very different from the Event Center, where all of the programs featured entertainment, whereas here there are lectures on history and other educational issues. And I find that really interesting. It really is a wonderful, positive benefit for the community,” she said.

Jessica said she feels fortunate to be able to enjoy the beautiful view on her commute to the island every day from Gulf Cove.

“Mondays are usually tough for me, but now they’re not so bad because I truly look forward to coming to work.” She said she was overwhelmed with how friendly everyone in the community has been.

“Even though it’s a job, it really feels like you are working with family, because everyone seems to know everyone,” she said.

Jessica is currently engaged to Kyle Rich, who also works at the Community Center. He does audio/visual work. The two of them met at Lemon Bay High School, and they were both involved in the theater program there. They currently reside in Gulf Cove.

Jessica had a birthday recently, and Kyle surprised her with a puppy, a 14-week-old boxer they named Parker. “He’s really cute, but now it’s like potty training two children,” Jessica said.

“The dog is great with Saylor. They play and interact together and have become good buddies. It’s adorable. It’s going to be fun to watch them grow up together.” In the few spare hours she has now and then, Jessica loves to paint. “I mostly use acrylic paint, and recently I’ve been thinking about delving into oil painting. It’s a little more complex, so I am kind of nervous about it, but I’m looking forward to a new challenge.”

She enjoys portrait painting and has been experimenting with still-life painting as well. “It really is stress-relieving. There are times I could stay up all night and just paint.”

Stop by and say hello to Jessica the next time you’re near the Community Center. She’ll be happy to answer any questions about programs planned for the upcoming season.