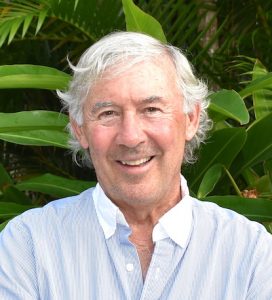 He served two tours of duty during the Vietnam War and received two Bronze Star medals, the Combat Action ribbon, the Presidential Unit Citation and the Vietnamese Cross of Gallantry – just to name a few honors.

Today, Ed Vick spends winters in Boca Grande, and a great deal of his time is dedicated to helping veterans.

Ed grew up in Greenwich, Pennsylvania, and after graduating from high school, he attended the University of North Carolina in Chapel Hill. He earned a bachelor’s degree in journalism and advertising in 1966, at the peak of the Vietnam War. Right after graduation, he marched over to a recruitment center and signed up for the U.S. Navy’s Officer  Candidate School.

He completed OCS in Rhode Island and was on active duty for about three-and-a-half years.

Most of his service time was in Southeast Asia. He spent a year on a ship off the coast of Vietnam and then spent a year in Vietnam in combat.

“That experience was a real turning point in my life, as it was for many people, I think,” Ed said. “Some negative, some positive and some in between.”

Ed said most of his experience in combat was in very close range, and much of it was at night. “So that added a whole dimension of psychological stress,” he said.

He recalls one of his most intense firefights. He was sitting in a boat in a canal near the Cambodian border, and the mission was to catch any North Vietnamese trying to cross the canal. It was raining, and there was no moonlight. He couldn’t even see his hand in front of his face. He couldn’t hear anything either, since the rain was pounding on the river. “It was total sensory deprivation.”

To preserve these memories, Ed published a novel called “Slingshot,” based on his experiences during the war. Although he wrote much of it when he finished serving in the 1970s, it remained in draft form until the late 1990s, when he rewrote it. The book was eventually published in 2002.

“It’s basically a true story that I fictionalized, because I had a hard time writing in the first person,” Ed said. “It’s about an actual mission that I commanded.”

Ed said writing the book was very therapeutic, because the mission was so intense.

“In my unit, the rate of casualties was about 50 percent – dead, wounded or missing,” he said. “Writing helped get it out of my system. To say it was traumatic would be an understatement.”

The book is currently available on Amazon.

Ed comes from a family of servicemen. “It wasn’t mandatory that I join, but my dad had been a hero at the Battle of Okinawa, and my great grandfather fought at Gettysburg – so there is definitely a family history,” Ed said.

In 1968 Ed volunteered to return to Vietnam with the Navy’s River Patrol Force. Serving with several different river divisions at the height of the war in 1969, he led over 100 combat missions throughout Vietnam’s Mekong Delta and along the Cambodian border. He was awarded Bronze Star medals with Combat “V,” the Combat Action ribbon, the Presidential Unit Citation and the Vietnamese Cross of Gallantry and other decorations.

He finished serving in 1970, and unfortunately found it difficult to land a job at that time. So he went back to school and earned a master’s degree from Northwestern University.

Right after graduation, he was recruited by an advertising agency in New York. Ed’s entire career was in marketing and communications. Half of it was spent in the position of CEO or chairman.

“I believe my experience in Vietnam – practicing leadership under pressure – helped me have a successful career,” he said.

Over the years, he ran a design company in San Francisco and a number of advertising agencies. He started out as an account manager, then worked as a writer, a creative director and finally as CEO.

In 1997 Ed was named chairman and chief executive of Young & Rubicam Advertising. Since he worked for global companies, he did a lot of travel around the world.

“I had a good 30-year career,” Ed said. “Most of it was in New York, aside from the years I spent in San Francisco.”

Ed met his wife, Stephanie, while working at Young & Rubicam. She was the chief strategist.

“She’s brilliant – her real expertise is understanding people and how to talk to them. She was like a translator between the consumer and the advertising team,” he said.

They were married at The Gasparilla Inn in 2010 and honeymooned in New Zealand.

Ed and Stephanie have four grown children: Josh, Charlie, Jane and Dana. Josh lives in Atlanta, Charlie is in Connecticut, Jane is in Jackson Hole, Wyoming and Dana is in New York City.

Dana and her family were just in Boca Grande last week visiting.

Ed and Stephanie have three grandchildren. They rescued a miniature Australian Shepherd mix dog and named him Steve.

When Ed decided to retire in 2002, he and Stephanie began searching for a winter home. They planned a trip and explored Florida in search of a quiet and serene place. They made reservations online at The Gasparilla Inn, never having visited the island before. And the minute they crossed the bridge, they knew they wanted to live here.

“It’s a unique place, as everyone who lives here agrees.”

Stephanie had to go back to work in New York, so Ed stayed in Boca Grande for a few more days and rented a place to stay the following winter. They bought a home in Boca Bay in 2008, and now they spend winters here in and summers in Connecticut.

When he is not boating, playing golf or playing a role in a Royal Palm Players performance (check out the staged reading at the Boca Grande Community center tonight), Ed spends much of his free time  engaged in veterans’ causes.

After his time in the military, and dealing with posttraumatic stress disorder, he understands the struggle many veterans go through and feels it is very important to give back.

Ed and his peers created a documentary about the war called “Dear America: Letters Home from Vietnam.” The movie was actually nominated for an Academy Award.

He began getting involved with younger veterans who were coming back from Iraq and Afghanistan and dealing with mental health issues.

“The VA (Department of Veterans Affairs) is not equipped or designed to treat combat veterans in a holistic way,” Ed said. “There doesn’t seem to be any urgency to help these people.”

Ed was the founding chairman of Iraq and Afghanistan Veterans of America (IAVA), the first and largest nonprofit organization set up to help veterans of those wars, and he worked to install a new and improved GI Bill for veterans.

Another organization Ed is involved with is “Give an Hour,” a program offered through the VA that develops national networks of volunteers capable of responding to both acute and chronic conditions that arise in the lives of veterans.

“We ask professional psychologists to volunteer one hour a week to help a veteran in a one-on-one setting.”

Another interesting cause Ed is working with is called “Purple Heart Homes.” It was an idea of two veterans who served and were wounded together in Iraq. When they returned home, they started

raising money to build and rebuild homes for veterans who are disabled. “The concept and mission is rebuilding veterans’ lives one home at a time.”

Ed is a well-known public speaker, who is often invited to talk about patriotism and veterans’ issues for Memorial Day ceremonies. He still serves on the board for the School of Journalism at the University of North Carolina.

“Slingshot” is currently available on Amazon. Ed is hoping to hold a book-signing event on the island before heading back north in April. Keep reading the Boca Beacon for details, or contact Ed by way of the Beacon’s office if you are interested in helping coordinate an event