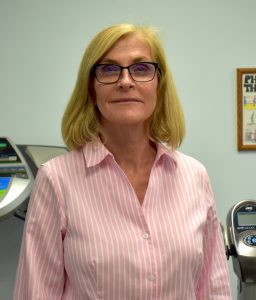 If you are an island resident and you’ve experienced issues with balance or perhaps even had a bad fall, you’ve most likely met Denise Elliot, a physical therapist at the Boca Grande Health Clinic Foundation annex building.

Denise is the clinical director of operations and specializes in fall prevention, a common problem which can become very serious as people age.

She attended the University of Maryland in College Park, just a few miles away from Washington D.C.

Denise met her husband, Gary Natovitz, via a blind date after she graduated from college. Two mutual friends had set them up, and it was the first blind date either of them had ever been on … and as it turns out, the only one they’d ever need. They will be celebrating 29 years of marriage later this month.

They moved to Virginia, where Denise went back to school and earned a master’s degree in physical therapy at Shenandoah University in Winchester, Virginia.

“After I graduated, I really wanted to go back to Maryland, but my husband loved Virginia, so we lived there until July of 2016,” Denise said. “And then we moved to Florida.”

The first seven years of her career she worked in northern Virginia. One of her patients was the rehabilitation director for a hospital in West Virginia. A couple of months later, he called and asked if she would be interested in interviewing for a position that was opening up. When she declined, he insisted that she at least come and visit the facility.

It was the University of West Virginia Hospital and Denise learned that one of her colleagues worked there. She accepted the position and worked there for 12 years.

They lived in a town called Purcellville, Virginia. “We were 55 miles from Washington D.C., so there were still a lot of city activities we could do, and we are big Washington Capitals hockey fans,” Denise said.

When they moved to Florida in 2016, the team was doing very well, and they actually planned their move around the Stanley Cup finals, but the team didn’t win that year. They did win the cup in 2018, and Denise and Gary still go to see them each time they play in Tampa.

Denise and Gary vacationed regularly at areas on the East Coast of Florida, and in 2013 they stayed in Sanibel Island and realized how much they liked Southwest Florida.

Before heading back to the airport, they stopped and looked at a model home and decided they wanted to live here.

So every vacation they took after they spent time looking at real estate. “Somehow we ended up in Port Charlotte, and we couldn’t find a house that had everything we needed,” she said. “I think the Realtor was starting to get frustrated, so she started showing us land.”

They found a canal with a view of the Myakka River, and it seemed perfect. “We looked at the water, and there was rainbow that day, and I took that as a sign that we needed to buy that land.”

They purchased the lot and had their dream home built.

Gary is now retired. He owned a business in Virginia called “Old Town Windows and Doors.” Gary has one daughter, Sarah Natovitz, who lives and works in Rockville, Maryland. When she is not working, Denise enjoys boating, biking and hiking.

“We like to be outdoors, and we like this part of Florida because it’s so natural, and we enjoy the wildlife and nature … it’s wonderfully preserved.”

When they first came to Florida, she had planned to take some time off from work and focus on getting settled in the area. But because their house was not completed when they arrived, Denise found herself overwhelmed and realized she needed to go back to work. She posted her resume online and quickly received a call from the chief operating officer at Fitness Quest Physical Therapy.

She was invited to interview for a physical therapy opening, and her qualifications earned her a job offer.

“There were two positions available: one in Punta Gorda and one in Boca Grande, and I accepted the Boca Grande position.”

Fitness Quest is locally owned, and there are 13 locations in Southwest Florida. Denise works on the island five days a week during season and also helps out at some of the other locations as needed.

“It’s a growing company. There are six new offices coming soon, and Fitness Quest currently manages the physical therapy department at DeSoto Memorial Hospital in Arcadia,” she said. “The company is 20 years old and has approximately 100 employees.” A second physical therapist will be joining Denise at the facility toward the end of November, and a third will be coming out to help in January, when her case load nearly triples.

Denise is “Mckenzie”-certified and practices mechanical diagnosis and therapy. It’s an internationally acclaimed method of assessment and treatment for spinal and extremity pain, developed by a therapist in New Zealand.

“We focus on what movements make a problem worse and what makes it more simple and helps you feel better,” she said. “We plan the treatment around that and build the program as the patient progresses.”

As Director of Operations in Boca Grande, Denise treats a variety of patients. Some may have simple sprains, others have total knee or hip replacements, and some have issues with balance and weakness.

Fitness Quest offers free balance screenings Denise said she appreciates her job in Boca Grande because the people are so genuine and are truly appreciative of the work she does.

“Many of them stop in and say goodbye before they go back up north in April, and as they return they will stop in and say hello … it’s a very special and unique island.”

The Boca Grande Health Clinic Annex is a pet-friendly clinic, and patients are encouraged to stop by and say hello with their pets while they are in town, but don’t bring them to the actual therapy appointments, as it would be too distracting.

Denise and Gary have no pets at the time, but she said every week when she reads the Boca Beacon and sees the photos of the adoptable animals at Suncoast Humane Society, she is tempted to go rescue one.

Denise took the month of August off, spent a week in Las Vegas and visited the Grand Canyon and Hoover Dam. She and Gary also visited Utah and went to several national parks.

“We ended up in Montana at Glacier National Park,” Denise said. “It was nice to see the mountains and do some hiking and spend time exploring the outdoors. It was a great trip.”

You can meet Denise at the upcoming “Boca Fest: Catch the Wellness Wave” event on the island that is planned for Saturday, Nov. 15. A celebration is planned at the Boca Grande Community Center, beginning with the annual Turkey Hoop Shoot at 10 a.m. There will be CPR and safety demonstrations, a bloodmobile, flu shots and health screenings. Denise will have handouts at the wellness booth that include a self-assessment quiz, so you can see if you are at a high risk of falling.

Fitness and yoga demonstrations will be presented, and a 2-mile fun walk is also planned.