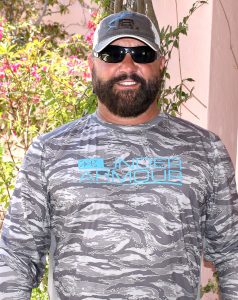 You may have heard him talk about fishing tips on the radio, caught a glimpse of him on Big Water Adventures television show or spotted him out fishing in Boca Grande Pass. No matter where he may be, he’s the guy known for one main thing – chasin’ tail.

He was recently in Boca Grande to fish in the Raymond James Redbone Tournament benefitting the Cystic Fibrosis Foundation, hosted by The Gasparilla Inn & Club. Chris became involved about 10 years ago when a friend told him about the two-day fundraiser. He’s served as the emcee at the auction party for years.

“We netted more that $200,000 this year, I’m really proud of that, it was a fun time,” Chris said. “Celebrities fly in from all over the world to participate.”

Chris has been a fishing captain in southwest Florida since 2007, taking clients out in the water in Boca Grande and up to Sarasota. His favorite spot to fish locally is Pine Island Sound.

“I have a very high client return ratio, and it’s because I work hard to earn and keep the business of my customer,” he said.

For the past several years, Chris has been a captain in the World’s Greatest Kids Tarpon Fishing Tournament in Boca Grande, as well as the Howl at the Moon tournaments and Ladies Day.

The captain said tarpon season is different every year.

“Normally you can see them off the beach by late March or early May, but the trajectory of the fish and the way they behave changes every year.”

This year he believes that patterns are different due to the record high temperatures in February and the high winds of March.

Chris was born in Jeffersonville, Indiana near the Ohio River.

Before moving to Florida, he lived all around the world. He joined the United States Army when he was 18 and served for 20 years.

The highly decorated First Sgt. was a watercraft operator and a Hovercraft pilot. He served multiple combat hours in five tours of duty in hostile regions around the word, and earned a bronze star for valor.

He was last stationed as a post sergeant major at Hunter Army Airfield in Savannah, GA.

Throughout his career, he had the opportunity to fish in a multitude of international saltwater destinations. He’s lived in Alaska, Honduras, Iraq, Afghanistan, Bosnia, and several other locales.

“I have fished in some of the coolest places in the world,” he said.

Toward the end of his military career he worked as a service recruiter for the Army for two years.

“The trick to that job was giving people what they want – which is usually money and destination.”

He comes from generations of men who served in several wars dating back to World War I.

When he moved here in 2005, he opened Tail Chaser Enterprises, a retail, bait, charter and outdoor apparel store. It was located on US41 in Venice.

“I always knew I wanted to move to Florida when I retired from the Army, and I really liked the Venice and Englewood area.”

In 2008, he started a radio show, “Live from the water” on WENG. The show was recorded in a local studio and became a syndicated two hour show in 2010 and was hears around the country.

In 2009, Chris bought a franchise of Coastal Angler Magazine and distributed it throughout Charlotte and Sarasota counties. He was an avid outdoor writer for years.

“It was only on the east coast, that’s where it started.”

Chris also has recently been published in the Boca Beacon. Look for his columns in upcoming editions in the newspaper.

“My foundation provides mentorship and hosts charities to assist fatherless teens,” he said. “Many of them have exited out of the foster system, and are living in group homes.”

He was involved in the filming of a television show called “Majesty Outdoors” filmed in Boca Grande last year. In the award-winning television series, fatherless teenagers are taken on their first outdoor adventure. Their lives are positively impacted as they experience the journeys (hunting or fishing) located throughout the United States.

“It’s on the Pursuit channel and last year it got about 20 million views. The young men selected to be featured on the show receive four year scholarships to a major university.”

Chris is an active partner with Florida Fish and Wildlife and works with them as part of a research team studying Goliath Grouper. Since 2011, he has tagged more than 500 in the Gulf of Mexico.

“I have a special activity license to bring this species on board to conduct studies and collect samples,” he said. “Only a few guides in the state have this license.”

“The shows have been seen in more than 30 million homes around the nation.”

He was appointed as a Florida Saltwater Ambassador for Bomber Lures in 2008.

“I actually helped in the development of the Bomber Saltwater Grade ‘Badonkadonk’ topwater lure,” he said. “It was selected as a topwater bait of the year nationally since its creation. You can find them everywhere now – they’re even in the fishing section at Walmart.”

Chris leads fishing seminars and is the founder of the Real Saltwater Outdoors seminar series.

“It’s the largest seminar/teaching operations in the state. Last year, my team appeared at 28 locations throughout the state, including Bass Pro Shops and the Florida Sportsman Expo.”

After years fishing almost daily, and going through several back surgeries due to injuries he experienced in Iraq, he now splits his time between guiding three to four times per week, public speaking, and product testing for the companies he represents.

“I’m just talking it a bit slower and enjoying every day. I do yoga several times a week so that has helped.”

The Boca Grande/Charlotte harbor fishing guide lives just off the island in Rotonda.

He launches at the Pink Docks in Boca Grande and the condos at Boca Grande North. He also does pick-up locations at Indian Mound Park, Pineland Marina and Laishley Park.