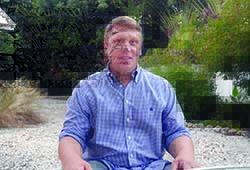 Boca Grande resident and self-employed contractor Brendan Dinan has lived on the island for nearly ten years. His parents live on the island as well which is one reason why he decided to move here in 2004. Brendan had his business in New Hampshire for 18 years before deciding to relocate to Florida.

“I was doing similar work just a slight variation of the kind of construction projects I handle down here,” he said.

Brendan attended the University of Montana and studied business and Chinese.

“I think my emphasis was really on entrepreneurship and sustainable building practices. In a way, there is a little bit of a connection there,” he said.

Brendan has watched the population on the island grow over the past decade and he has worked on dozens of housing projects for local residents as well as new buyers.

He has a crew of people who work for him and they do frame to finish style home building.

“We cover just about anything you’d like changed or added to your home,” he said.

The business owner said it was often more difficult to work in New Hampshire through the brutal winters.

“We always tried to schedule it so that we were able to work indoors during the cold months. We would install the windows and doors first so we were able to have the heat on while we were working,” he said.

Then he lived in Jackson, Wyoming for several years and that’s where he started his construction career.

So all together he has more than 20 years experience in the construction field.

He came to Boca Grande for a job opportunity that he was offered after Hurricane Charley. He decided after doing a couple projects on the island that he wanted to live here.

Brendan has an older brother, Matt, and a younger sister Molly.

Molly came to visit over the holidays with her children, Harper and Rory.

Brendan said he has been consistently busy since November.

“Ever since Thanksgiving, many people came back for the holiday, saw what work needed to be done and then they left for Christmas. So there were a lot of projects to finish over those few weeks,” he said.

Brendan said his clients usually give him a lot of freedom on the projects they request.

“They usually ask me to design something, show them a drawing and then build it. So that takes some time to come up with a creative idea and then design it on paper and custom build it from there,” he said.

Brendan said he enjoys working on custom homes because it’s all about the eye and what makes people feel good and comfortable in their homes.

He said he is usually able to balance two projects at any time.

“It depends on the size and what kind of work needs to be as well as the deadline date. And I have to make sure I have enough available workers to complete it,” he said.

He said a major problem this area has right now is there is not enough skilled labor workers available.

“And that is a problem that’s consistently tied to the housing market. When the housing market dried up several years ago, all the workers moved on. They went to Texas and or South Dakota where the focus was on drilling for oil.”

But then in the last few years more people started having an interest in buying on the island and his business is currently strong.

He says another challenge in his field of work is finding storage for equipment, tools and materials. He usually uses the jobsite for storage, but sometimes that gets challenging.

“I have a mobile trailer that I use to transport tools back and forth to jobs,” he said.

Brendan said he gets much of his business through “word of mouth” customer referrals and his peers who work in the business.

“At times, if my colleagues are too busy to accept new work, they will refer people to their friends in the field. And it’s kind of a tight-knit community here, especially in terms of construction; people want to know who they are working with and they want to be able to trust them,” he said.

“It’s a little cleaner and it’s usually indoor work. That’s when I can get more creative and think of new and different design ideas. As a builder I really enjoy all kinds of architecture,” he said.

The busy contractor had a dog named Jackson when he first moved here, but sadly, is no longer with him.

“I have been watching a client’s dog – a six-month-old lab named Eddie – so that’s kind of been my fill-in dog, but I am tempted to get another dog one day,” he said.

When he is not working, Brendan enjoys traveling. He has been all over the United State as well as Europe, Mexico, the Caribbean.

“I like seeing new places as well as exploring old, historic towns. I like cities that actually have a center to them, with a lot of green space to walk around. But I also appreciate the country after going to school in Montana,” he said.

He also enjoys outdoor activities like skiing and surfing.

He can often be seen on Manasota Key at Blind Pass Beach with his board.

“I like hockey and fishing and almost any outside activities. I like catching tarpon is the pass and I also like to fly fish. I like to do that in the creeks just off island. There are baby tarpon and snook in those creeks,” he said.

Brendan visits his home state whenever possible, having most recently gone back to Nantucket last summer.

“It’s beautiful all year long there, you just have to be a hearty person to handle the harsh, cold winters. The wind is always blowing on the north Atlantic,” he said.

Brendan also enjoys fixing and flipping properties. He bought a house in Cape Haze last year with the intention of living in it while he renovated it and then he eventually sold it.

“It’s a hard thing to do – work on a house while you are living in it, but I accomplished my goal,” he said.

He hopes to invest in commercial properties in the future.

Brendan said he loves working in Boca Grande because of the opportunity to work on high-end homes and there is beautiful architecture.