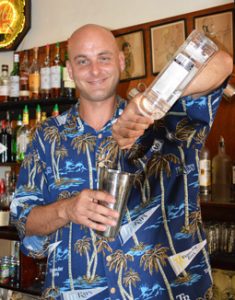 Creating ice-cold concoctions daily and always serving them with a smile, this week’s profile candidate is Alan Lenard, the newest bartender in town.

He started working at The Temp in March, and he already knows many of the locals by name and anticipates their favorite drink orders the moment he sees them walk through the door.

Alan is originally from LaPorte, Indiana, where he grew up with three sisters and a younger brother.

He attended Indiana University in Bloomington, Indiana and intended to major in marketing, hoping that would lead him to an exciting future career. He ended up graduating with a major in sociology, because he found the classes to be the most interesting on his course list.

“It’s a younger kind of science. It’s not concrete or set in stone. There are several ways to think about theories and topics,” he said.

After graduating from college in 1997, he moved to Englewood because his dad, Dave, had relocated there. His mother still lives in LaPorte, Indiana.

Dave worked in the air-conditioning business and has many friends in Boca Grande who work at Grande Aire, where Dave also worked for a while.

“When I first came down here, I really didn’t know what I wanted to do as far as work, and I didn’t know many places in the area. I looked for marketing jobs, but I just couldn’t find anything,” he said.

A few weeks after he moved to the area, he was offered a corporate sales position at a dental firm in Tampa. The company made and sold everything from dental floss to dentures. His uncle was working for the firm at the time and told Alan about the position.

“I did that for about one week, and I realized I absolutely did not want to do that as a career, so I ended up resigning,” Alan said.

After that, he accepted a bartending job at Barnacle Bill’s in Englewood, where he worked for several years.

“I found it to be a good match for me. I enjoy working with different kinds of people,” he said.

Then he decided he wanted a change of pace and moved to New Orleans, where he tended bar in a town where the party never ends.

“It was really fun, but it did get old after a while. It was very strange to step out of my apartment and see a parade happening at any given time of the day or night. And it seemed like I was always working – working way too much. It was exhausting being on Bourbon Street. About 80,000 people walk that street every day.”

So after spending four years in the “Big Easy” and living in round-the-clock nightlife, he decided it was time to return to Englewood and enjoy living in the quieter, more peaceful town.

He found a job at the Placida Pearl in Englewood and worked there until he discovered the position opening at The Temp.

His secret specialty drink at The Temp is called a “Grande Grenade.” While he won’t specify on the exact ingredients that make up the drink, he did give a hint that the main flavors are melon and peach. He named the drink after a well-liked cocktail that he served daily in New Orleans, called a “Hand Grenade.”

“The drinks were so popular, we actually had an assembly line of workers who would fill the cups with one ingredient and pass them on to another bartender to add the next one. We sold them as fast as we could make them,” he said.

Aside from work, Alan’s hobbies include all kinds of sports. He enjoys baseball, basketball and tennis. He said his dream job would be a baseball analyst, because he enjoys keeping statistics at the games. He is a huge Tampa Bay Rays fan. He also likes going to the beach as often as possible. Tennis is another one of his favorite sports, but he doesn’t play as often as he should.

“I might pick up a racquet once a year,” he said.

Alan has a 16-year-old daughter, Madison, a 14-year-old son, Colton, and a four-year-old daughter, Treva. His two older children attend Lemon Bay High School in Englewood, and the youngest lives in Michigan with her mom. He is not currently married.

The person he said he admires most in life is his grandfather, Leonard.

“I’ve just always wanted to be more like him. He is 90 and still my hero. He’s my biggest fan.”

Since the 1930s, Alan’s grandfather had a very successful establishment in LaPorte, Indiana called “Leonard’s Bar.” It was family-owned and ran for more than two generations.

“It was very well known. He eventually sold the place, and the new owners kept the name. They knew the patrons would still call it that, so they just kept it that way,” Alan said.

Being a barkeep may just run in his bloodline. His grandfather did it for 50 years, his mom did it for 30 years, and he has done it for almost 20 years.

Alan said his favorite thing about working in Boca Grande is being able to meet the people who live and work here.

“It’s a unique place and it’s nice to work with folks who are from all different places and backgrounds. And the locals area great,” he said.

He said bartending can be a lucrative career, but it’s also very challenging at times when business is slow.

Alan’s interest in marketing still holds true today. He recently created a Facebook page called the Boca Buzz. There, he posts updates about the happenings in Boca Grande.

Check out and ”Like” the page to see regular updates of daily lunch and drink specials at The Temp as well as other activities happening around town.

“I try to update the Boca Buzz page every day, and I encourage people to share photos and videos of Boca Grande and information about events.”

Stop in and say hello to Alan the next time you’re on Park Avenue on the island. He’ll be sure to greet you with a smile and offer delicious drink suggestions if you need to cool off.

Newer PostDr. Hank Wright has passed away at 92
Older PostThere are lots of legends in Boca Grande Pass