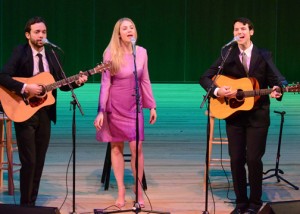 A Band Called Honalee, a Peter, Paul & Mary tribute band, will be performing at the Boca Grande Community Center on Thursday, Feb. 4 at 7:30 p.m. in the auditorium.

Producer Aaron Gandy said the group has been performing together since 2011.

“I was lucky enough to team up with these gifted and charismatic musicians, who all feel as passionately as I do about this era of music,” Gandy said. “I founded the group because we (the singers and myself) feel that folk music needs to be sung and heard again and because the messages of these songs are still very much

Gandy said the group is based in New York City, where the 1960s folk movement received its start.

“In fact, our first rehearsals were in Manhattan’s east village, just a few blocks from where the legendary west village folk scene occurred,” Gandy said.

The group has a very active touring schedule. They visited 26 states in 2015, traveling as far west as

Montana and as far south as Louisiana. This is the time they will be performing in Florida.

“We are very excited and look forward to playing in Boca Grande,” Gandy said.