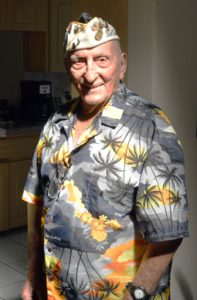 To put it simply: War is hell. Those were the few words Pearl Harbor survivor John Seelie had to say, reflecting on what his life was like during the attacks in 1941. He remembers standing on guard duty the morning of December 7, when he saw the aircraft carriers flying toward him.

“At first, we thought they were American planes. By the time we knew what was happening, they had taken out most of the area,” he said.

Without going too far into the raw and gruesome details, he described the overwhelming feeling of hatred that was rooted deeply within him after that experience.

“During the battle, all you had was hate – and we used it,” he said. He explained that the troops were unable to get extra ammunition for what seemed like a long time after the first wave of attacks, because the man stationed to unlock the building was missing. At least 2,403 Americans died and 1,178 were wounded during that battle that fueled the fire for World War II. Not one service member he served with made it back home.

Seelie was one our four men serving in Ohio when his sergeant asked where the men wanted to be stationed. They all said Hawaii, but they were told only two men could go. Seelie and another man won the coin toss. Daily trips to Boca Grande Until just a few years ago, Seelie would ride his bicycle daily from his home in Englewood to Boca Grande. He could often be spotted having a cup of coffee and breakfast at “Loons on a Limb,” owned by Jay and Susan Spurgeon. He also loved to fish and would drop a line in the water whenever he had the opportunity. John has made it a tradition to attend the remembrance ceremonies in Pearl Harbor every five years since then. Last year he attended the 74th anniversary, and he plans to attend the 75th anniversary ceremony this year.

“This is the last one I’ll go to,” he said. Cathy Joel, an employee at The Gasparilla Inn and Golf Course, is Seelie’s next-door neighbor. They have dinner together about once a week. Joel has setup a GoFundMe account to help offset the costs of getting John and a caregiver to the anniversary ceremony in Hawaii. She said American Airlines has offered to fly the able-bodied veterans from California to Hawaii, but they have to get to Los Angeles on their own and pay for their own accommodations for as long as they choose to stay. So far, more than $2,300 has been raised. Any money gathered is for John’s personal use for extra excursions while he is attending the ceremonies.

A ceremony to honor him Joel and a mutual friend, Mike Cahill, have arranged a celebration to honor Seelie on Friday, Nov. 11, Veteran’s Day, at 8 a.m. Lemon Bay High School.

They’re planning to surprise him with a gift at the ceremony: A custom-made shirt personally designed for Seelie with embroidered words, dates and artwork.

The buttons on the shirt were removed from a 1941 Army jacket. There is also a replicated inscription on the shirt signed by Seelie’s wife, Betty, whom he was married to for more than 62 years. The lettering is all done in military font. The numbers “29-0” are sewn into the one shoulder of the shirt – which highlights that he had 29 knockouts as a boxer while he served. He was scheduled to fight on the evening of the Pearl Harbor attack but never had the chance.

He hasn’t picked up a pair of boxing gloves in 74 years, until recently, when he put on a pair and practiced hitting the heavy bag at the YMCA, where he works out six day per week. The artwork for the shirt was designed by Emily Kopke.

The surprise custom-made shirt will be presented to him at the ceremony at the high school. With a gentle heart, John said he was finally able to get over his hatred of the enemy in 1992, when he attended a reunion where service members from both sides were in attendance.

“We all realized we were just doing what we were told to do at the time,” he said.

Seelie will also be honored today at the Venice Chalk Festival at 1 p.m., where artists will create a 3-D sketch of him standing in uniform in front of a battleground. He will be brought to the event via police escort.

The Pearl Harbor veteran will celebrate his 94th birthday on November 25. If you’d like to help send back one of the last men standing from the attack on Pearl Harbor, visit gofundme.com/johnseelie or contact Joel at (941) 468-8322.