Zachary Allen Davis of Port Charlotte passed away on Friday, Dec. 2, 2016 at the age of 37. Zachary was born on April 8, 1979 in Richmond, Indiana. Zachary was a 2004 graduate of Pennsylvania College of Art and Design with a degree in culinary arts. 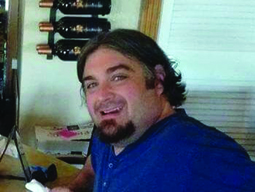 Zachary enjoyed working as a chef, spending time with his son Dakota, attending concerts and going to the movies. Zachary was a very kind-hearted and joyful person who made friends with everyone he met. Zachary is survived by his father and mother, Bruce and Carole Davis of Port Charlotte; two brothers, Shaun VandeVord of Fountain City, Indiana and Joshua Davis of Columbus, Indiana; his son Dakota Vaughn of Richmond, Indiana; and many friends around the country. There will be a celebration of life ceremony held in Richmond, Indiana on Zachary’s birthday, April 8, 2017, location to be determined. You may express your condolences to the family at lemonbayfh.com Lemon Bay Funeral Home and Cremation Services is in charge of arrangements.