William Donald Rader, 86, a former resident of Greenwich, Conn. and of Block Island, R.I., died peacefully in his Boca Grande home surrounded by his three daughters on January 11, 2017. 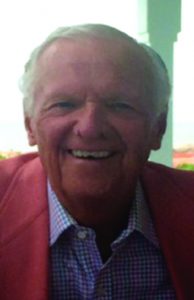 Bill attended Principia School in St. Louis, Missouri, where he joined the swim team, which fostered his lifelong love of swimming and living near the water. At the University of Pennsylvania, he earned a bachelor of science degree in business from the Wharton School and was an avid member of the fraternity Delta Tau Delta.

After he served in the United States Air Force as a First Lieutenant, Bill embarked on a career in advertising that would ultimately span more than four decades. He began by completing a training program at Owens-Corning Fiberglass Corporation. During his 18-year tenure, he became a marketing manager working on numerous successful promotional campaigns. In 1972, Bill established William D. Rader and Associates, a Direct Response Marketing business promoting leading corporations such as Campbell’s Soup, Kodak, Hershey and Lever Bros.

Bill believed strongly in civic responsibility. Throughout his adult life, he volunteered on numerous boards and committees making a difference in his local community. In Greenwich, he was actively involved in local politics and was a dedicated supporter of the Republican Party.

Bill served on the Planning and Zoning Board of Appeals and was a Former Vice-Chairman of the Greenwich Academy Board of Trustees. In addition, he was an active member of the Belle Haven Club as previous Chairman of the House Committee. In Block Island, he was a strong proponent of land preservation, the study of Lyme disease and the Block Island Health Center.

In Boca Grande, Bill served on the Board of directors for the Boca Bay Pass Club, was a member of the Boca Bay Master’s Association and former President of the Harborside Association. Having just celebrated 44 years of sobriety, his strongest mission lay in helping and supporting others with alcohol addiction. Bill volunteered in the field of alcohol and substance abuse as a board member of Fellowship Center, an organization dedicated to helping former convicts with substance abuse problems. As a former chairman of the Alcoholism Council of New York, and a member of the National Council on Alcoholism and Drug Dependence (NCADD), he worked tirelessly to promote educational awareness of the disease through a variety of programs, fundraising, and advertising campaigns. Above all else, Bill loved his family.

After he lost the love of his life 24 years ago to cancer, he never remarried. He loved to tell the story of when he first cast eyes on his future bride. In a NYC nightclub, she was surrounded by a group of eligible bachelors vying for her attention.

“That’s the woman I’m going to marry,” he boasted to a buddy. His persistence paid off. Joan Sperry finally accepted his third marriage proposal by hitting him up for a dime to call her mother and invite him to dinner.

Later, he was a devoted father to his three daughters who lovingly referred to him as “Mr. Mom” a role he took very seriously and with great pride.

He left this world as he lived it, with courage, love and dignity, drifting off to the words of Frank Sinatra, “I did it my way!”

In lieu of flowers, donations may be made in Mr. Rader’s Memory to the National Council on Alcoholism and Drug Dependence (NCADD) 217 Broadway, Suite 712, New York, NY 10007, www.ncadd.org.