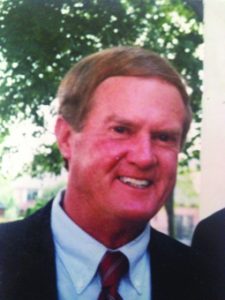 He was born on December 2, 1936. He is survived by his wife Virginia McMillan (“Ginny”); siblings Edward Lambrecht and Susan Siphron; sons, James and Jeffrey, and grandchildren, Collin, Brooklin, Shannon and Hunter. Bob grew up in Grosse Pointe, Michigan, and graduated high school from Taft School in Watertown, CT.

He graduated from the University of Pennsylvania (Wharton School) in 1959.

For six years, he served in the Air Force Reserve in Grayling, Michigan. In 1961, he married Ginny, his wife of 55 years. They shared a love for boating, golf, and tennis. As the third generation involved in the Detroit real estate business,

Bob was chairman of Lambrecht Realty Company (later Lambrecht Company), a full-service company involved in appraisal, brokerage, management, and financing. During this time, he served as president of the Mortgage Bankers Association of Michigan and the Detroit Board of Realtors, and vice president of the Michigan Association of Realtors. In 1990, he brought his sons into the business as Lambrecht Properties Inc., involved in buying and managing commercial real estate. He instilled a love of giving to others in his children.

He was chairman of the board of Cottage Hospital in Grosse Pointe, and later served on the board of Henry Ford Health System for 16 years. He was a board member of University Liggett School. Born a yachtsman, Bob used to sail in the Port Huron to Mackinac sailboat races. First mate, Ginny, and crewmembers Palmer, Jim, and Jeff learned to tie knots in the basement during the winter months. Starting with a 23’ Lancer, then moving to a 33’ Egg Harbor, then a 40’ Egg Harbor, the captain and crew enjoyed many summers of cruising the Ge reat Lakes.

Aboard his 55’ Viking, he and Ginny loved to cruise the “Great Loop” from Michigan to Florida for three weeks in the spring and fall. As a 20-year resident of Boca Grande, he served as commodore of Boca Grande Pass Yacht Club, and the Trestle Cove Yacht Club.

He will always be remembered for his welcoming smile, joking laughter and all-around friendliness and hugs. He will be greatly missed. In lieu of flowers, memorial donations can be made to Boca Grande Health Clinic Foundation, 280 Park Avenue, P.O. Box 2340, Boca Grande, Florida 33921.