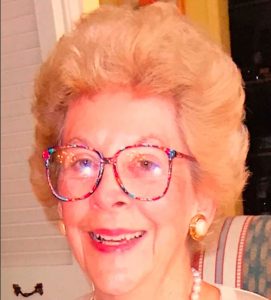 Born May 27, 1930 in Fayette, Mo., she was the daughter of Jay Button and Lucille Ownby Hayes.

She was preceded in death by her three siblings, William Hayes, Jay Hayes and Mary Hayes Gustin.

Her husband, Manuel Drumm, whom she married in 1953, preceded her in death in 2004. She is survived by her companion in her later years, Frank Tull, M.D., of St. Louis, Mo.

Her childhood was spent in Fayette, where she marched with the Central Methodist College band as a junior twirler. She moved to Columbia, Mo., in high school, where she was the May Queen and a member of the Verse Choir, and more importantly met Manuel Drumm. She attended the University of Missouri, pledging Kappa Kappa Gamma sorority, later serving as the president. She majored in education and after graduation went on to teach kindergarten in Kansas City. They moved to Charleston, S.C. while her husband served in the Navy and she taught fifth grade. In 1955 they moved to Sikeston, Mos.

In Sikeston, Pat became involved with the Missouri Delta Gray Ladies volunteer association and served faithfully every Friday for more than 50 years. She was a Girl Scout leader, member of PEO, Community Choir and the first chairman of the Missouri Delta Hospital Ball event. She welcomed many new people to Sikeston with cookies, rolls, lunches and parties and had a wide circle of lifelong and new friends. She will be remembered as a beautiful, well-dressed lady, gracious and proper, knowing no stranger and interested in all those around her. She loved to bake, take walks, play tennis, visit with friends, shop and travel to her beloved Boca Grande, Florida. She was a member of First Christian Church of Sikeston.

A celebration of life will be held at 11a.m. on Saturday, June 15, 2019, at First Christian Church in Sikeston, with a reception to follow.