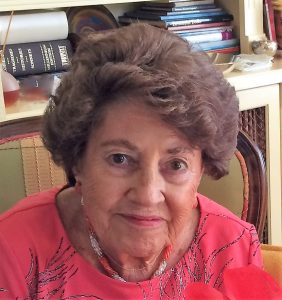 Diane was born in London, England on June 27, 1931 to Helen Caspersen Ryan and Robert Preston Ryan. The family returned to Terre Haute, Indiana when Diane was two years old. Her father died when she was young and Diane established the foundation for her homemaking when her mother returned to work ultimately hosting a local television program, The Helen Ryan Show, to support Diane and her sister, Katherine (Kay).

Diane graduated from Wiley High School in 1949 and earned a bachelor’s degree from Trinity College in Washington, D.C. in 1953. She worked for the local newspaper in Terre Haute before marrying the love of her life, Bill Kunkler, on February 11, 1956 at St Benedict’s Catholic Church in Terre Haute. The couple, who had grown up within two blocks of one another, first lived in Cincinnati, Ohio and then Valley Forge, PA before settling in Worcester, Massachusetts where they lived for 41 years.

Diane was a woman of extraordinary faith, kindness, compassion, strength and creativity. Her hands were rarely still, always doing or creating something for others. She was a devoted wife, loving mother, exceptional homemaker and gourmet cook. Her homes reflected her incredible gardening, artistic, aesthetic and handiwork skills and provided a special base for frequent family gatherings and celebrations throughout the years.

She was actively involved with the Massachusetts Society for Prevention of Cruelty to Children and served on the MSPCC board for many years. She applied her passion for art to her work as a docent and chair of fundraising for the Worcester Art Museum.

Bill and Diane discovered Boca Grande in 1988 and transitioned to being full-time residents in 1999. They had a joyful time together building a beautiful home that has been a special place for hosting family gatherings and entertaining dear friends.

Diane and Bill made Our Lady of Mercy Parish the center of their community activities on the island. Diane served as Extraordinary Minister of the Eucharist and lector, a member of the Finance Council, participated in Bible Study and was Chairperson of the Boca Grande Child Care Center. She also tutored children in Arcadia, served on the Board of Directors for Catholic Charities, Diocese of Venice and was a lady of the Holy Sepulcher.

Diane and Bill were blessed to be able to travel the world together including trips to China, Kenya, Italy and Egypt. Their favorite was their journey to the Holy Land, where she and Bill renewed their wedding vows in Cana. Diane loved going to the opera, symphony and Broadway shows and sharing that love with her children and grandchildren.

A funeral Mass will be celebrated on Saturday, Nov. 10 at 9 a.m. at Our Lady of Mercy Catholic Church in Boca Grande, Florida with interment immediately following at Gulf Pines Memorial Park in Englewood. Funeral arrangements are being made through Lemon Bay Funeral Home in Englewood. In lieu of flowers, please honor her life by doing something kind for someone in need. Alternatively, donations may be made to one of her favorite organizations – Catholic Charities, Diocese of Venice or Catholic Relief Services.