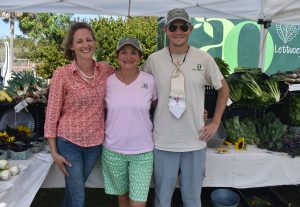 There’s a new vendor at the Boca Grande Farm and Fish Market, and their mission is to leave a long, lasting mark organically.

Kay Hall and her family grow and sell certified organic vegetables on their six-acre family farm in Arcadia.

But her mission goes far beyond just selling produce at area farmer’s markets.

Hall’s daughter, Allison Francis Hall Nelson, was an ambitious attorney who was nicknamed “Aloe” by her fiancé’, David.

At age 28, just two months away from marrying the love of her life, Allison was diagnosed with stage four metastatic breast cancer. The diagnosis came as a shock — she had a nasty cough she couldn’t shake, but had been keeping up her usual pace as an attorney, and had even been running the day before her diagnosis. She soon learned she had stage four metastatic cancer, in the breast, lungs and bones. Doctors said she had one year to live.

As the news set in, Allison and her family and friends began to contemplate ways to improve her prognosis, looking into natural means of fighting cancer and boosting her health.

She learned eating organic food could help prolong her life, and although it did not save it, Nelson hoped the outcome would be better for others.

She saw an opportunity within her own family, longtime ranch owners, and decided to set aside a portion of the Hall Family ranch to grow organic, healthy produce for schools, hospitals, restaurants and grocery stores. In providing growing children, those who are ill and the general public with healthy food choices, she might prevent and impact cancer’s devastating effects on other families. In addition, a portion of the produce grown would be donated to others battling cancer.

“Allison was our oldest child. She was a daughter, wife, sister, and friend. The family was proud to say she was a fourth generation Florida lawyer — and the first female. We are very proud to be able to carry out her mission,” Kay said.

Her memory lives on as a portion of the certified organic produce grown on the family farm is donated to families of children with cancer. Aloe Organics supports families through the Children’s Cancer Center of Tampa.

“Last year we started a nonprofit called Aloe Gives,” Kay said. “Allison felt strongly about the need to educate families on eating healthy. We are partnering with schools in Sarasota County to create gardens. The aim is to educate and provide healthy, organic vegetables in school cafeterias. By becoming young gardeners, children will learn where their food comes from. My son Miles is president of the new organization.”

Kay said the family has since made a niche for growing unique, colorful organic vegetables that appeal to families.

“One example of this is our purple beans,” she said. “The first time we donated them, we received a video from a mother whose child was battling cancer. The video was of the beans changing colors as they started to boil with the child exclaiming in surprise in the background. Eating healthy vegetables can be a fun experience.”

In addition to everyday staples like lettuce and kale, they also grow extraordinary varieties from rainbow carrots to purple choy.

“We always have something that you may have never seen or heard of before at the market.”

It’s been a very tough season for growers, Kay said.

“First the hurricane set us back, and now the freeze. Farming is hard work,” she said.

Aloe Organics is the newest vendor at the Boca Grande Farm & Fish Market, held on Fridays from 9 a.m. to 1 p.m. at the ball field on Wheeler Road.

For more information, including a list of recipes for healthy meals, visit aloeorg.com.