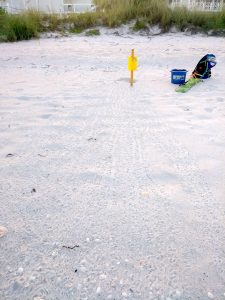 It’s baby sea turtle time. The Boca Grande Sea Turtle Association reported the first hatch from zone five on Monday, July 9. This was the second hatch of the season and there were several more during the week.

Patrol members said all of them oriented perfectly with the direction of the ocean.

As of July 7, the Association reported 417 Caretta caretta (loggerhead) turtle nests on the island. There were 391 reported false crawls (when a turtle comes up onto the beach but does not lay a nest). No Chelonia mydas (green) turtle nests have been discovered so far this year.

The green live stranding sea turtle that was found drifting and lethargic in Boca Grande on June 29 and transported to the Clinic for Rehabilitation of Wildlife (CROW facility) in Sanibel Island was released Thursday, July 12 at Coquina Beach on the southern end of Anna Maria Island.

The reason for the release in Bradenton is that the water there is free of red tide, and water in Boca Grande is still considered not safe.

“In true ‘It takes a village’ fashion, this has been a team effort between BGSTA, Mote Marine, CROW and the FWC,” said Mel Csank, BGSTA board member. “Thanks to all who helped out and especially our permit holder Donna, who has been organizing the release while on vacation. As always she goes the extra mile.”

The Kemp’s ridley sea turtle – one of the most critically endangered species of sea turtles – found near the causeway in Boca Grande on June 28 is recovering very well. The turtle was acting very lethargic and was transported to CROW by BGSTA patrol members.

At the intake exam, the turtle was quiet but alert, with neurologic deficits (weakened ability to move flippers, delayed reflexes), and had superficial corneal ulcers in both eyes. Initial bloodwork revealed a mild anemia. Veterinarians are suspecting brevetoxicosis, and the turtle received IV medications upon admission. Topical antibiotics are being used to treat the corneal ulcers. Bloodwork and neurologic exams were repeated daily to track its progress and adjust treatment accordingly.

The BGSTA is looking for some kindhearted folks who live locally, have a boat and might be interested in transporting stranded turtles to the CROW facility on Sanibel Island.

There are no turtles in need of transporting at the moment; this is a request for the future if turtles are rescued.

Currently, transporting a turtle to CROW takes about four hours (round trip) by car, so the trip would be much shorter by boat and less stressful for sick or injured turtles.

This is a fairly rare event, so it would not be a regular commitment.

Optimally, the organization would like to find a few boaters that volunteers could call in an emergency.

The BGSTA is actively looking for volunteers. Training and supplies are provided. If you’re available a few mornings a week to assist, go to facebook.com/seaturtleawareness or send an email to bocagrandeseaturtles@gmail.com to find out more details.