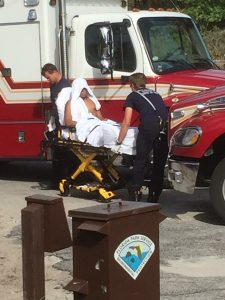 One of Castro’s family members being taken away from Range Light Beach for evaluation after the incident. Photo by Nigel Spencer-Barnes

BY MARCY SHORTUSE – The disappearance of a swimmer off Range Light Beach on Saturday has left many locals and regular visitors pondering whether “safe” beaches are really safe at all.

It is approximately 2.5 miles north of Boca Grande Pass, and is normally considered to be a harmless place to swim. However, there can be rip currents along any part of Boca Grande’s shoreline, depending on the tide and the weather.

Michael Stevens and his son, who were vacationing in Punta Gorda and happened to visit Range Light Beach on Saturday, were playing in the waves when he heard Castro’s family members yelling for help. There were two boys and two girls on the sand bar approximately 20 feet from shore, and it was apparent they were in distress. 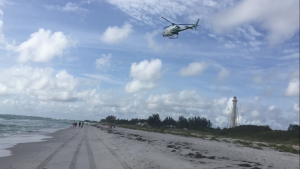 “We went to them and took the two girls back to shore. We found someone with a jet ski go out to get the two boys as this would be faster than swimming back out. After the jet ski owner got one of the boys on the back, I asked him about the other boy. He stated that he did not see anyone else. He offered a life vest to me while he ran to shore with the boy he just rescued. After dropping off the boy he came back and continued the search with me also on the jet ski until the police showed up.” 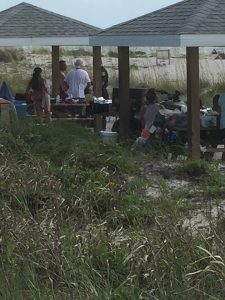 Rescuers stop to regroup at a picnic table at Range Light Beach while searching for the missing swimmer. Photo by Andrew Sanger

Stevens said the life vest he offered Stevens was the one that witnesses and authorities thought had been given to Castro. In fact, Castro was never wearing a life vest.

“When my son and I first noticed the drowning swimmers none of them had a life vest,” Stevens said. “After we got the gentleman to go out with his watercraft I started back out to the two boys. When I got out there, he had pulled one of the boys out of the water. I asked him about the other boy. He stated that he observed no others in the water. He offered the life jacket to me. I took the jacket, as the waves were rough. I was going to stay out hoping the boys were just separated.”

Many know that Boca Grande Pass is a dangerous place to be for anyone, but this might bring people’s guard down about the rest of the island’s gulf-side beaches. A rip current can form almost anywhere in a tidal body of water when conditions are right.

A rip current is a stream within the water that occurs at certain times where the water flows rapidly away from land, often at low spots on the Gulf bottom or at breaks in a sand bar.

When Castro’s family was out on the sand bar, the water seemed harmless. As time passed, the current became swifter and swifter as a westerly wind got stronger and stronger due to high pressure to the south of Florida and a cold front approaching from the north. The waves got higher, the wind was gustier and the rip current formed. 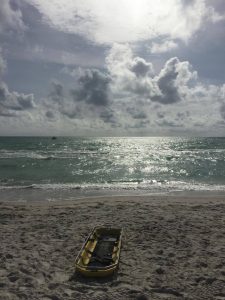 On June 18 slack tide occurred at 1 p.m., then began ebbing. By 5 p.m. the tide was almost all the way out. When Castro disappeared the tide was about halfway out, and at Range Light Beach the water was actually headed from south to north – toward Little Gasparilla and Cape Haze – not toward Boca Grande Pass.

With a full moon waxing on Saturday and brisk winds, it was little wonder that on Friday, June 17 at 5 p.m. the Federal Emergency Management Agency posted a rip current statement, listing Charlotte and Lee Counties among those affected, with the primary time for danger being between Friday morning and late Saturday afternoon.

The FEMA application that will give you alerts as to potential rip current activity in your area can be found in the iPhone app store and Google Play for Androids. You can also check www.ready.gov/alerts or fema.gov. 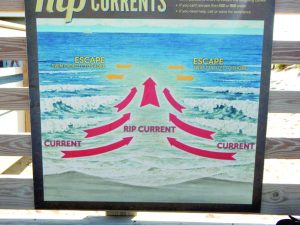 WHAT YOU SHOULD KNOW ABOUT RIP CURRENTS