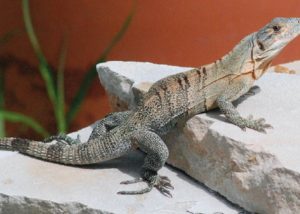 At the first Lee County MSTU “iguana” board meeting in several years on Tuesday, March 5, the board approved a new budget and had an extensive discussion regarding ongoing lizard control methods.

While Kay Wagner has been on the board for years, three new board members joined her – Skip Branin, Sally Kling and Joan Hall. New Lee County MSTU Coordinator Tim Gard led the meeting, as up until that day the board had no chairman. Wagner was voted in as chairman, as she has served the on board the longest. Another island resident, Lindsey Allen, put in his application to be the fifth member of the board.

One of the first questions asked was by Branin, who inquired as to how the group would call executive session. Gard explained that, to his knowledge, that was not an option but that he would find out. Gard then explained The Sunshine Law to the group, which disallows them from discussing board business among themselves with the exception of meetings.

“You can send out an email to the other board members with an idea or development, but you cannot talk to each other, ask questions or make comments to each other regarding the information,” Gard said.

Kling then asked why MSTU meetings had stopped for so long, and Gard replied it was because there had been a lack of a quorum for so long, and business couldn’t be conducted. Panel members then asked why there needed to be five members. Gard explained while it wasn’t necessary to have five (just a quorum of five was needed), that was how many were supposed to be on the board.

Gard then explained that there are 22 streetlights in the Lee County portion of the island that the group would be responsible for discussing (including the fact that new LED lights were being pushed in the county instead of the current sodium arc lighting that is in place), as well as the iguana eradication program.

The board then discussed the current iguana control contract, which will be up for bid again in 2020. In 2016 Lee County extended Cera’s contract to include the winter months, as it had once been just for nine months. A special clause was also included in the contract to include time for emergency calls Cera might receive during off hours.

As so many of the board are from Boca Bay, they began discussions with the fact that the gated community on the island had hired supplemental assistance from another trapper just for their needs recently. Trapper George Cera, who has been with this program for 11 years, replied that he was aware of that and was more than happy with their decision. When one of the board members asked him why he was happy with it, he replied that their purpose was to suppress the iguana population, and that they would never be able to eradicate them entirely. Boca Bay is an entity unto its own, as there is a significant amount of very dense underbrush and loads of flowering plants that iguanas love. They are also in close proximity to state park land, which Cera wasn’t allowed to hunt for years.

“People in Boca Bay started to look at me as their own private trapper,” Cera said. “I am not a private trapper. If it’s the house, around their house or under their house, I’m not supposed to touch it. I’m not going to do something that could cause property damage or hurt someone. A lot of the situations I was running into fell into that category. For a white-glove service that Boca Bay was looking for, such as someone calling me and telling me an animal was in their yard right then, or once a day or once a week, I couldn’t always be there at that time. If you look at the whole territory map I cover, I am driving through that area all of the time. I am focusing on juveniles and females; I don’t worry about the males as much. I want all the females and the little ones. I explained that the more I move through the area, the more I will get. As it stands right now, I don’t take in a month what I used to take in a week … sometimes a day.”

Cera said iguana numbers are down, which makes it harder to find them.

“If you have a bunch of vegetation around your house, I don’t have a way to make it stay there until I come and shoot it,” he said. “If I have an open hole brush and I don’t have to worry about nontarget animals, including people’s pets, I can set a snare. I have about a 95 percent success rate with that, whereas with a baited trap my success rate is much lower.”

Cera said if someone has a particular iguana that always hangs around, he will loan them a trap to give it a try.

The board then explained to Cera that they had heard much dissatisfaction with the program, because many people didn’t believe iguana numbers were going down, including the fact that Cera had to continually get permission forms filled out from each property owner in his territory to be able to eradicate them there. Cera explained that he went by each contract, and he had to get new forms filled out each time. Hall said she had heard there was a lot of miscommunication in their communication, primarily because no one had knowledge of the procedure to follow. She then asked what the best way to get information to him would be. As far as Boca Bay, he said, they could notify the office or simply call him.

One of the biggest problems regarding iguana control, Cera said, was the fact that until recently there were large properties in his territory that had not given him permission to perform his job there. He also explained to one board member that if there was a lot of lush foliage and neighbors who would not give permission, there would always be problems.

Hall asked if he didn’t want to come into a person’s property, how would someone request a trap.

One man in the audience, John Gravanda, said he has been calling for two years at his property on Gulf Boulevard, and that he has many, so many in fact, that they sit on their back deck all day and watch them. He said while he knew Cera couldn’t expect to just walk up and get them all, he couldn’t just walk through once and get them either. He said what it would take was for someone to go there and to “stay for a while.”

“I can’t go to your house and stay there for a while,” Cera said.

“Then we need a new system, if they keep getting worse every year,” Gravanda said.

When he was asked why he couldn’t use traps more at some of the homes, and that the property owners could notify him when there was something in the trap, Cera said he had found it wasn’t an efficient method.

“The traps need to be picked up or shut every night, because there will always be nontarget animals getting in them,” Cera said. When the board asked what that meant, he explained that raccoons and opossums will more than likely be what they find in the morning, not an iguana.

“What happens with those animals,” Cera said, “is that once it has been in a trap it will become trap-smart.”

“In observing the discussion here, and unfortunately it was in the newspaper this past week, we are on this commission, and I have had 10 friends call me and tell me to ‘get the $%# iguanas’ and that there’s a general dissatisfaction with what we’re doing about iguanas on this island. I don’t care if it’s trapping, poisoning, shooting or what … there’s an impression that virtually nothing is being done. You say we are keeping them under control, but it doesn’t appear that way to me. Maybe that’s because it used to be a lot worse than it is. The perception out there is that the job is not getting done.”

“I deal with perceptions every single day,” Cera replied. “And what I would like you to do now that you’re on the board, everyone who is a property owner, any time they want to ride with me they are more than welcome. Take a few hours out of your day and come with me; you will see what’s going on there, and I can answer any question you have.”

Cera said if anyone needed a trap, to contact him or buy a trap, and he would spend the time to help people set it up and keep it maintained. The cost to maintain the traps and bait the traps was prohibitive for him, particularly because one of the best baits is a strawberry, and most times of the year they are very expensive.

Cera said one particularly pesky iguana at the Fust Library was finally, after weeks of trying, caught in a live trap.

“I showed them what to do, and they told me they didn’t realize how hard it was,” he said.

He also addressed the fact he has not been hired to kill native species, even if they are found in a live trap. He releases them in the same spot as he found them. He will help to get them out of the trap, but that’s as far as it goes.

“I’m not here for those animals,” Cera said. “I’m here specifically for iguanas.”

When the panel asked for accountability as far as hours worked and iguanas killed, Gard said Cera is normally on a 40-hour work week, depending on the weather. As far as the “body count” is concerned, every invoice that Cera turns into the County includes the number of iguanas eradicated. When the board asked if all they had to go on was Cera’s good word and faith, Cera said it wouldn’t do him any good to lie about it.

“If I tell you a lie about how many I’m getting, you’ll see the numbers increase even more,” he said. “There is no lying about it. What I can tell you is that when we started this program, the scientist who researched the iguanas on this island, Dr. Jerry Jackson, said there was about 12,000. Back then there was one day when I killed 500 iguanas. Now I don’t take in as many in a month as I used to take in in a week, or even a day.”

Gard said the count since November of 2018 has been 439 iguanas removed. He also said he was working on fact sheets to distribute to the board in the future.

Gard then moved the conversation to the budget. At this time there is $110,000 in the MSTU, and they anticipate a need for $108,000 for the new fiscal year’s iguana program. The board approved a motion to set the millage accordingly.

At the last meeting in 2016, it was estimated that Cera had eradicated more than 16,000 iguanas … far more than Dr. Jackson had thought lived here. At that time he was averaging 2,000 iguanas a year.

Spiny-tailed iguanas are an invasive species in this area, and while they were previously thought to be herbivores, new research has discovered that the lizards will eat anything to survive, including each other. For many years the gopher tortoise and songbird population were all but gone from Gasparilla Island because of the predatory iguanas that have no real natural enemies here, other than man.