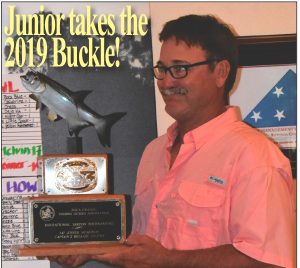 It was a third-time honor for Capt. Lamar Joiner Jr. on Friday night at the Long Marsh Country Club in Rotonda, as he was awarded the 2019 Jay Joiner Memorial Belt Buckle. It was an exceptionally great honor inasmuch as  the late, great Capt. Jay Joiner was Lamar’s brother.

The Belt Buckle is an island tradition that has been around since Jay died in October of 1992, when he was just 25 years old. He was the first captain to win back-to-back major tarpon tournaments (the 1990 Boca Grande Club Invitational Tarpon Tournament and the 1991 Boca Grande Area Chamber of Commerce “World’s Richest” Tarpon Tournament) two years in a row.

The first Jay Joiner Memorial Belt Buckle was given out the year after he passed away, in 1993. The Buckle is engraved with an eagle – which represents the best fisherman nature has to offer – and a ruby, Jay’s birthstone.

This was the first year that Cappy Joiner, the past president of the Boca Grande Fishing Guides Association, didn’t present this award, as he passed away in March of this year. His nephew, Capt. Waylon Mills, is the new president, and he presented the award instead.

Lamar Jr. had 23 releases this year in the qualifying tournaments – Ladies Day Tarpon Tournament, “Howl at the Moon,” the World’s Richest and the Red Gill  – for the top honor. Capt. Sandy Melvin trailed with 17 releases, and Capt. Wayne Joiner rounded out the top three with 15 releases.