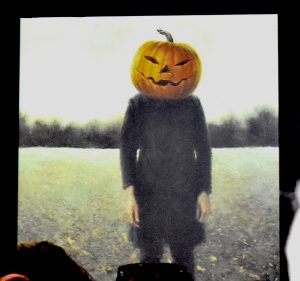 “I’m here to share the feelings and emotions Jamie had for his work,” she said.

Wyeth was born in 1946 and grew up on his family’s farm in Chadds Ford, Pennsylvania.

Known for his portrait and landscape paintings, Wyeth believed there is no formula for painting a portrait.

“Painting to Jamie was addictive; he always kept his tools sharpened,” Tolsdorf said.

She quoted him saying “objectivity and subjectivity are always a constant battle.”

Tolsdorf explained that the painter once said: “It’s very easy to get lazy as an artist – especially if you’ve experienced any level of success.”

Wyeth loved using the moon, sun and candlelight in his paintings.

“His perspective of nature was always changing,” Tolsdorf said.

He finished a painting of mushrooms by moonlight during the darkest hours of the night, wearing a miner’s hat for light. It’s titled “Mushroom Picker” and was completed in 1963. Tolsdorf quoted Wyeth as saying, “The painting literally smelled of penicillin.”

He created a self-portrait called “Pumpkinhead” in 1972. It was exhibited in the Brandywine River Museum of Art in Chadds Ford from November 1974 through January 1975.

“I’ve had the good fortune of being a docent at the Brandywine River Museum for more than 20 years,” Tolsdorf said. As a docent, she always enjoyed working with children because they were so imaginative. “They’re able to see things from such a pure perspective.”

Tolsdorf has explored the art of Wyeth’s father, Andrew, and his grandfather, N.C. Wyeth.

Donations from the event will benefit the Friends of Boca Grande Community Center.