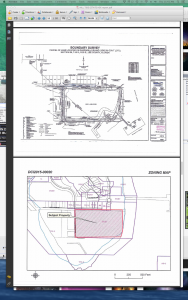 BY MARCY SHORTUSE – The proposed development called Hill Tide Estates is a little closer to fruition. On Thursday, April 28 Boca Pass Partners LLC received word from the Lee County Hearing Examiner’s office that their report and recommendation had been approved for rezoning to Residential Planned Development status from the original Port land use status at a public hearing.

Charles Basinait, the attorney for Boca Pass Partners, said they are tentatively scheduled to appear before the June 8 Lee County Board of County Commissioners for the final public zoning hearing.

The applicant did request 11 deviations for the Hill Tide Estates RPD. A “deviation” is considered to be a change from the typical land development regulations, and for each one the applicant has to show that the departure from classic land development usage will enhance the development, “preserve and promote the general intent of the Lee Plan, and protect the public health, safety and welfare.”

The County found that the plan is acceptable, meets with County development regulations, is compatible with land usage from surrounding areas, will not adversely affect environmentally sensitive areas or natural resources, and that all proposed uses are appropriate at the subject location.

Because the removal of all non-native vegetation will include Australian pines, which are vital to dunes on the property, the applicant will also have to plant sea oats, seashore paspalum, railroad vine, sea purslane and dune sunflower.

It was noted in the report that gopher tortoises would be relocated away from the property prior to building (in accordance with FWC guidelines), and that an osprey nest would be removed from the site during the non-nesting season and when the nest was inactive.

The proposal includes the building of 20 single-family homes on the 10-acre lot at the south end of the island, off Belcher Road, which used to be FPL property. In November the two companies that make up Boca Pass Partners – Seagate Development Group LLC out of Fort Myers and BCB Homes Inc. of Naples – made a public presentation on the island, with very few contesting the project. The only question raised by those who attended was whether beach access would be affected in front of the proposed development. The answer to that question is still pending.