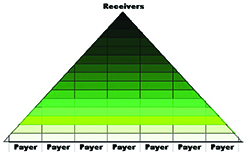 According to Wikipedia, a Ponzi scheme is a fraudulent investment operation in which the operator, an individual or organization, pays returns to its investors from new capital paid to the operators by new investors, rather than from profit earned by the operator.

Mormino’s allegation that “Florida, in some ways, resembles a modern Ponzi scheme. Since the 1950s, yesterday’s homeowners have been paying for today’s newcomers” is critically flawed.

The professor’s generalizations about Florida are also questionable. As a Floridian who moved from New York, I am fully aware of New York’s political corruption (various legislative leaders are now in or going to the “Big House” from the New York State Houses), and any comparison to financial malfeasance makes Florida look great compared to New York, where much of the 2007, 2008 and 2009 economic crisis originated.

The growth of Florida is in no small part related to many expats from New York – the youth of New York – having joined retirees in coming south.

Yes, Florida is growing. New York is far behind, since many of us “vote with our feet.”

Despite some growing pains, I am pleased and proud to be a Floridian.