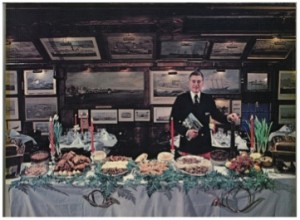 William George Winterer, former owner of the historic Griswold Inn in Essex, Connecticut, devout Roman Catholic, fierce defender of free enterprise and personal liberty, raconteur, and philanthropist, died peacefully at his home in Boca Grande, Florida on February 19, 2016. He was 81 and had been in failing health for several months.

Bill was born on July 7, 1934 in St. Louis, Missouri, the son of Dr. Herbert O. Winterer and Dorothy Sprengnether. Bill graduated from the University of Florida and earned an MBA from the Harvard Business School.

After University of Florida graduation, he became a United States Coast Guard officer and was initially stationed in San Juan, Puerto Rico on the buoy tender Sagebrush, and then in New London, Connecticut where he was a navigator of the barque Eagle and ran the mess hall at the Coast Guard Academy.

After business school, he moved to Phoenix, Arizona and then New York City where he was an investment banker for Goodbody & Company and later CEO of Florida Capital Corporation.

In 1972, Bill purchased the venerable Griswold Inn and began a second successful career as a restaurateur and inn keeper. For 25 years he made the business thrive and expand, at one point including two other Connecticut restaurants in addition to “the Gris,” the Town Farms Inn in Middletown and the Dock ‘n’ Dine in Old Saybrook.

Bill’s larger-than-life personality thrived – he was the ultimate host and entertainer, always putting others at ease, offering a smile and handshake, providing food and drinks and regaling audiences in stories for hours-on-end.

He and his wife contributed to the communities in which they lived. Bill was a Life Trustee and Founding President of the Connecticut River Museum in Essex. He started the board of the Ivoryton Playhouse Foundation. He was on the board of advisors of the Goodspeed Opera House, the USS Constitution Museum, the National Maritime Historical Society, and United Bank & Trust Company.

Bill was an avid yachtsman having crewed in seven Bermuda races as navigator/cook. He owned, among others, two noteworthy cruising yachts, a 44-foot John Alden designed ketch named Axia, and a 50- foot motor yacht named Victoria. The Winterers sailed the entire New England coast over the years and cruised the Victoria to and from the Gulf Coast of Florida.

A funeral mass was held at Our Lady of Mercy on Boca Grande on Wednesday, February 24.

Donations in lieu of flowers may be made to the Island School Foundation, PO Box 1090, Boca Grande, Florida 33921 or a charity of the donor’s choice.