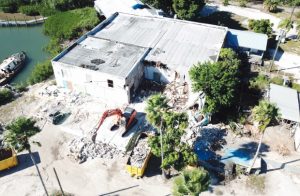 If you’ve driven past the old Fishery property as of late, you may have noticed that some work is being done and some things have been moved around. Excavation of the old commercial fishhouse began early Tuesday morning, but not everything is going to be demolished.

Real estate developer Jay Feinberg bought out the previous developer and closed on the 18-acre property located at 13000 Fishery Road on May 1, 2018. The existing buildings on the property were dilapidated and literally not functioning, and the projected goal is to make it a thriving piece of land again.

“We gave two of the frame cottages to John Keen, an Englewood Realtor, who is going to relocate and restore the buildings,” said Feinberg. “These were the only buildings that could be saved. The others were too far deteriorated.”

Demolition continued this week on the other ten buildings on the property. For safety and security, the site has been fenced and gated.

“We ask the public not to go sightseeing at the Fishery, because the site is now closed for the demolition work,” Feinberg said. “It is anticipated that it will take about a year to complete the working drawings and obtain the building permits before actual construction of the new project can start.”

Feinberg plans to create a “village” to serve the needs of the local community, while maintaining the charming character and scale of Placida and Boca Grande. The “Village & Marina at Boca Grande” will carry the theme of “Old Florida,” with a restaurant and bridge center design reminiscent of the Boca Grande Lighthouse.

The focal point of the proposed new marina development would be a 150-room boutique hotel designed to cater to destination weddings and meetings. It will be no more than three stories tall.

The area adjacent to the mangrove preserve will be utilized for 60 units of concierge-assisted, independent senior living for those 55 and older. These will be two- and three-bedroom units inside a gated community but will have access to all of the hotel amenities. This would include maid service, linens, food service, repairs and maintenance.

The developers plan to keep the existing marina that has 44 boat slips and is leased with the State of Florida.

A roundabout near the marina will feature a replica of the Gasparilla Island Range Light, and the restaurant and bridge room will have a design similar to the Port Boca Grande Lighthouse.

“We thought people would enjoy seeing a touch of Boca Grande at the new destination site,” Feinberg said.