Meredith Haws Bolasco spends many of her days creating beautiful, exotic pieces of wearable art. Her jewelry designs often include rare treasures found in an exotic locale, such as ancient Greek 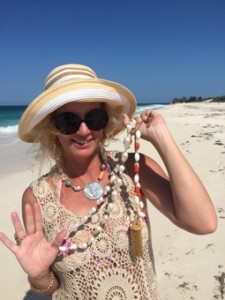 She will be the featured artist at Island Art Days this weekend. The 11th annual event will take place from 10 a.m. to 4 p.m. on Saturday, April 2 and Sunday, April 3 at 431 Park Avenue, downtown Boca Grande.
Meredith has been designing jewelry for more than a decade. Raised in Alabama and Tennessee, she moved to Florida because she wanted to be near the Gulf of Mexico.
She currently resides in Tampa but has been visiting Boca Grande since she was a young child.
Her father, Frank Haws, is a pilot and discovered the island while flying over it in a plane.
“He still flies into Coral Creek airport every few weeks. He is 83 and still very sharp. And he’s quite a character,” she said.

Meredith said she feels very fortunate to have spent as much time in Boca Grande as she did growing up.
“We would come down a few times a year from Alabama. I remember running around the island as a little girl. Fugate’s was the only store that was open at that time,” she said.

Her dad owned several pieces of property on the island over the years and still has a home here.
“The property is near the Gasparilla Island Beach Club. He bought a little cottage on the south end of the island and relocated it toward the back of the property. It’s a very special place,” she said.

Originally from Huntsville, Alabama, Meredith attended a private school in Maryland and then went to the University of Alabama to study art.
Her mother was a painter. She passed away, and Meredith’s dad later remarried.

“My stepmom, Patsy, is an artist as well. So I am fortunate to have two moms who both had amazing eyes for art,” she said. “Patsy has been a great influence, and she is a big part of how I got into the jewelry business.”

Meredith moved to Tampa about 17 years ago. Her older sister, Ashley, was dating a guy from Tampa. The two eventually got married. After coming to visit Ashley in Tampa several times, Meredith decided to move there.
“I thought the Tampa Bay area would make a beautiful place to live. The water is just amazing, and there is so much to do there,” she said.

Still very interested in art, she took some jewelry design classes in Tampa while working at a high-end jewelry store in the city.
Inspired by the Gulf of Mexico, she has been in the jewelry business for about 16 years. She has a studio inside her home in Tampa, where she designs the pieces.

She said she doesn’t usually participate in art shows, but she feels that Boca Grande is such a special place, she can’t refuse coming to the island to do a show.

“I get to see a lot of repeat customers who come down for vacation, and they know about this art show. I am very appreciative of the support I get from the locals and the visitors. I feel very blessed and very honored … I really love what I do,” she said.

Meredith explained that she enjoys working with vintage pieces the most but also likes to do research and see what is trending.

“I think I am definitely more drawn to antique pieces, so I am always hunting for cool old items to make rare and unique designs,” she said.

She once found a wonderful antique bronze belt buckle in France. She split the buckle in half and made the two  pieces into different pendants for two necklaces.

Meredith will be bringing about 200 pieces of jewelry to Boca Grande for this weekend’s show.

“I try to have something for everyone’s taste. You can spend quite a bit of time looking at the jewelry on my table and then catch something you missed when you look again.”

She uses a variety of materials and mixes different colors and metals to create one-of-a-kind items.
“They make for some very nice gifts. I really enjoy seeing my work when it’s being worn by other people,” she said.

The jewelry designer said she never knows what she’s going to make next, depending on the treasures she finds. She tries to match different stones that complement different pieces.
Meredith travels to different destinations in Europe with her stepmom every year, searching for unique things.
“I also love to shop at the antique flea markets in New York City,” she said.
She added that she usually tries to catch the big antique and craft market in Mt. Dora every year.

When she is not creating jewelry, Meredith enjoys traveling with her husband, Greg.
The couple met through friends at a house party in Tampa before going to a John Cougar Mellencamp concert.
They have three dogs: two Cavalier King Charles spaniels, (Peanut and Bella) and a long-haired chihuahua (Honey).
“We rescued her from the Humane Society of Tampa Bay, where I volunteer and help with fundraising,” she said.

Meredith also enjoys bicycle riding, taking walks on the beach, shelling, traveling, and of course, hunting for rare antiques and unique treasures for her jewelry designs.
She doesn’t have a particular favorite book, but she said she’s more a fan of coffee table books, “More is More” by Tony Duquette, “My Live Affair With Jewelry” by Elizabeth Taylor, and “Slim Aarons” by La Dolce Vita, to name a few.
“And I love biographies – I love a story on someone’s life. Daphne Guinness, Gloria Vanderbilt, and Rare Bird of Fashion, The Irreverent Iris Apfel are a few favorites that come to mind,” she said.
She’s a fan of “oldies but goodies,” television shows like “Three’s Company” and “I Love Lucy.” She also enjoys investigative true stories like “Dateline.”

Greg is the owner of .
“I also help with the marketing, so I just had to mention it,” she said.

Meredith said she is looking forward to seeing her customers and meeting some potential new ones on the island this weekend.
“I love coming to Boca Grande. I love the feel of the community and the people here,” she said.

If you don’t get the chance to attend Island Art Days this weekend, you can also find her jewelry at Aerial, located at 444 Fourth Street in Boca Grande. If you’d like to check out some of her work online, visit
meredithhawsjewelry.com.