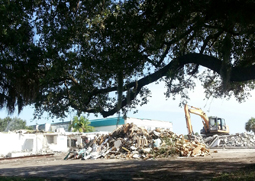 The Gasparilla Island Conservation and Improvement Association (GICIA) is extremely pleased to report that demolition of the Old Mercabo Conference Center and its surrounding structures is well underway.

Land Conservancy Chairman Bayne Stevenson reported that “the project is off to a good start,s and it’s exciting to see several of the buildings now in piles.” One of the initial obstacles was an active osprey nest on the top of one of the buildings. Because ospreys are protected by the Migratory Bird Act, demolition had to be put on hold until two things could happen – the nest was no longer active and a permit was obtained to relocate the nest.

Although the nest was not successful this year, the permit was obtained, and the nest has now been relocated to a platform with a view on the Preserve site. Once the osprey was happy, our demolition contractor, Forristall Enterprises, Inc., was free to proceed. Two of the smaller buildings on the east side of the property have already come down, and work on the conference center began this week. It is anticipated that demolition will be completed by the end of August.

As with any large construction project, unanticipated challenges present themselves. One of GICIA’s original plans was to work with Charlotte County to contribute material from the buildings to one of the County’s permitted artificial reefs, located about 10 miles offshore of Gasparilla Island. Charlotte County staff was very encouraging, and GICIA directors felt this was a great second life for the building. Original estimates from Charlotte County on the cost of barging the material were reasonable.

In fact, Charlotte County even had money in their budget to contribute to the effort. But after tremendous effort, we have come to the disappointing conclusion that it is not financially feasible, with actual contractor estimates coming in at nearly $500,000. As we finalize plans for the actual restoration of the site, we have made the decision to stockpile smaller, clean concrete “chips” for the 150 ft. of riprap along the seawall abutting the proposed “shorebird nesting” area.

GICIA Executive Director Misty Nichols has met with the Florida Fish and Wildlife Conservation Commission on site to discuss the development of a shorebird nesting area at the southern tip of the peninsula. “Whether or not we will be successful in attracting shorebirds is unknown, but providing this area will add to the diversity of the site and create much needed habitat for these fragile birds,” said Nichols. “Adding the riprap will increase the foraging area and make the site that much more appealing for the birds we would like to attract.”

GICIA’s consultant, Certified Arborist Rick Joyce, has been working with the GICIA Land Conservancy Committee and Board to finalize the planting and restoration plans for the site. After listening to input from our members and consulting with Rick, we have decided to revise the restoration plan to significantly reduce the amount of plantings on the peninsula of the parcel. This is a beautiful area with stunning views, and it has been decided that these views will be maintained. This change not only insures a beautiful view shed, it will also enhance the shorebird nesting area (by reducing perching sites for predators) and will come at savings of more than $200,000.

There will still be a planted buffer around the northern perimeter of the site (along Placida Road), which will be modeled after the Bike Path Master Landscape Plan. There will also be a wetland/marsh area created. This will enhance the diversity of the site and bring in many species of birds, and it will also reduce costs by limiting the amount of fill that will need to be used on the site. GICIA is extremely appreciative of every dollar that has been donated to this effort, and we want every donor to be confident in the fact that we are being fiscally prudent. We received and paid our first wave of invoices and are within the GICIA Board-approved budget for the demolition phase of this important project.

“With the reduction in planting costs of approximately $200,000, I would conclude that we are in a strong financial position to complete the overall project well within our original target of $1.3 million used in our fundraising campaign,” said Stevenson. GICIA President Lance Isham said, “At this point, we are confident the demolition and restoration phases of this project will be completed by the end of 2016.”

Once it is complete, there will be a celebration for everyone who has been involved in and supported the GICIA in preserving this important parcel.

Newer PostDue process for all is good, but what about this slippery slope?
Older PostCharlotte County increases area of no wake zone