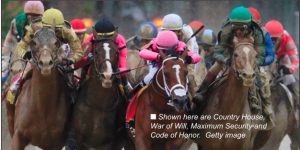 The 145th Run for the Roses at Churchill Downs shocked many fans who watched the race when judges ruled that Maximum Security was disqualified, but one of our local horses that ran still did well.

Despite a late scare from island resident William Farish’s thoroughbred Code of Honor, Maximum Security crossed the finish line first. The victory lap lasted all of about 15 minutes, as an objection from riders led to the first disqualification in the history of the Derby, at least in terms of alleged racetrack infractions.

Country House, a 65-to-1 long shot, was the surprise contender down the stretch, taking the actual “W.”

Other horses with island ties were Win, Win, Win (grandson of the Chapman’s horse, Smarty Jones) taking ninth place, and By My Standards finishing in 11th place.