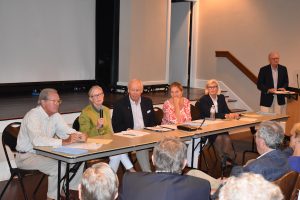 Boca Grande Health Clinic CEO Hilja Bilodeau announced at the annual meeting held on Thursday, April 11 at the Boca Grande Community Center that the Clinic had the highest recorded volume of visitors in its history. And the Clinic needs more space – which is the reason they are planning to use the annex building to house doctors and staff.

“For the past three years, we have had a six percent new patient volume annually,” Bilodeau said. “So the clinic is growing, the island is growing, and we are very excited that we are able to provide additional services.”

The nurse’s station has also been redesigned and remodeled to accommodate four members of the clinical staff. This summer, the roof will be replaced and the air conditioning system, which is the original system, will be replaced. The waiting area is also going to be revamped.

“We also will be replacing the Clinic’s phone system,” Bilodeau said. “The current system was installed in 1990, and it cannot handle the volume of calls coming in and out.”

The Boca Grande Health Clinic is accredited by the Accreditation Association for Ambulatory Health Care (AAAHC).

“This is a nationally recognized accreditation, and it’s the gold standard of healthcare,” Bilodeau said. “It recognizes best practices in healthcare standards. Very few clinics of our size are recognized – so take comfort in knowing we are meeting national standards.”

Clinic Foundation Chair Dr. Daly Walker announced that Harrison Coerver will be joining the Foundation Board this year.

Walker then addressed the crowd about recent misinformation and concerns that stemmed from an article that was recently published in the Boca Beacon.

“I want to acknowledge that we did a very poor job of explaining things to the public,” he said. “I want to ensure you that we are going to do better in the future – we pledge to do that.”

“I want to be very clear – the role of the Foundation is to support the Clinic in whatever decisions that are made,” Freeman said. “Our role is not to tell the Clinic how to conduct its operation. We have a very high-quality staff and a very good Clinic. Nothing in life is free, and we really rely on your support.”

Dr. Jim May talked a bit about the history of the Clinic and said Louise DuPont Crowninshield started that ball rolling with healthcare on this island in 1938.

“In those days it was best to get sick on Tuesday, because there was one doctor on the island each Tuesday,” May said.

The Clinic opened its doors in 1947, and it started out on the second floor of the Railroad Depot building. It later moved to the old theater building, and eventually to the Fugate building. As it continued to grow and require more resources, the freestanding clinic moved into the present annex building in 1964.

“In 1990 we had outgrown that building, and soon a new clinic building emerged across the street,” May said. “The annex became a rental resource and has continued to be one for 55 years.”

The Foundation and the Clinic have maintained ownership of the annex, with an eye to the expansion needs of the Clinic.

Dr. May said the Board recently failed at educating the community of Boca Grande as to why this is necessary, without it becoming clear as to what was needed to be done with the annex.

“We are pushing beyond our seasonal capacity, and thus we are forced as a clinic to look at the annex for expansional needs now and in the future,” May said. “We regret that we will no longer be able to provide space to some of our currently very valued providers. This does not mean that continued provision of these services will disappear. It just means we will no longer be able to rent space to them.”

May went on to explain that the wellness center discussed in the recent Boca Beacon article would address things like memory issues and how to avoid falls.

The floor was opened to the public for questions.

Jim Martin asked the Board what sort of marketing study was done that would justify discontinuing the services that patients enjoy at this moment.

Bilodeau replied that the space was needed for primary care and urgent care services.

“We currently have three physicians now, and our exam rooms are able to accommodate only two of our physicians,” she said.

Linda Jamison questioned the Board from the back of the auditorium, asking why they made the decision to remove the physical therapist and dermatologist.

“They are only here two days a week as it is, and we can’t even get to them,” Jamison said. “I come down to get accessible health care from the Clinic. The annex has served us well, and I don’t see why we need to change things.”

Dr. May said all concerns would be addressed going forward. He advised everyone to forward questions and concerns via email to info@bghc.org.

“Our Board will listen carefully to all of your concerns, and our collective decisions will be inclusive.”