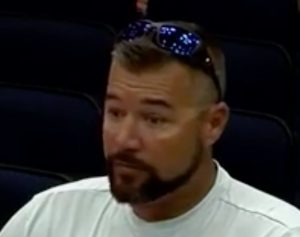 Charlotte County Commission staff announced on Tuesday, Aug. 14 that they would be holding an emergency meeting to discuss a resolution declaring a local state of emergency relating to red tide.

The announcement was made less than three hours prior to the meeting.

The meeting was open to the public, and a couple dozen residents and business owners showed up to express their concerns. Remarks were limited to three minutes.

Capt. Mike Slattery with Palm Island Outfitters said his business as a whole is demolished.

“We need help, we need funding,” Slattery said. “Many of the guides in the Englewood area have businesses that are in peril. This is our livelihood.”

“One was a baby,” she said. “I watched the mother try to revive it in  the canal. It was heartbreaking – just heartbreaking to see our wildlife dying on our shores like this. It has to stop.”

Aaron Koher, owner of Glass Bottom Boat Rentals in Boca Grande, approached the Board and mercifully asked for support.

“This is my life,” he said. “I had to shut my business down on Memorial Day weekend – almost three months ago – and we’re still closed. Why are we just discussing this now? Sarasota and Lee counties have already declared a state of emergency.”

The Board responded that this was why the emergency meeting was called: to address the issue by the end of the business day.

Koher is known for leading weekly coastal cleanups at the north end of the island, where his business is located.

Rachel Wells represented “Riding the Waves,” a personal catamaran rental company located on Placida Road in Englewood. She said the business has been closed for the past eight weeks. She asked if there would be relief for local small businesses suffering from a loss of revenue.

To her relief, she was told that help would be available immediately following the meeting.

The declaration of emergency enables business owners in Charlotte County who have been economically impacted by the red tide outbreak to apply for disaster loans. Small businesses can qualify for up to $50,000 per eligible business. To learn more about the small business bridge loans, visit floridadisasterloan.org.

Another resident said “Florida is becoming a toxic wasteland, and this could destroy our tourist industry.”

Charlotte County Emergency Management Director Jerry Mallet said there is no prediction as to when the current red tide situation will end.

“It is going to be research that solves this problem, and by being part of this declaration it shows that we are serious and we have the same frustrations as everyone here.”

So, where do we go to talk about Lake O?

Mallet said the answer to the question is the South Florida Water Management District, because it encompasses two rivers and Lake Okeechobee.

SFWMD is currently dealing with trying to set up reservoirs for off-loading water directly to the south.

“It won’t happen overnight, but they are working very hard to get federal and state funding to get that done.”

Newer PostTwo iconic island figures gone, but not forgotten: Jeff Gaines Jr. and Steve Seidensticker
Older PostWhat’s this, another lizard on the island? One who walks on water? Well, why not