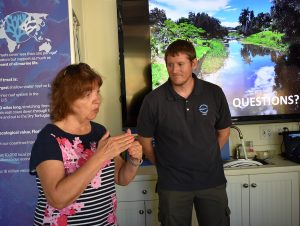 What is happening with the local snook population? That’s what Mote Marine scientists Dr. Kevan Main and Dr. Ryan Schloesser explained to guests at the final “Coffee with a Scientist” presentation on Wednesday, April 10.

The scientists gave an interactive presentation called “Advances in Snook Aquaculture Technology Development and Stock Enhancement,” followed by a casual Q&A conversation with a group of island guests.

“We know that initial survival is critical for effective stock enhancement,” Schloesser said. “We need to put these fish in a place where they are more likely to survive those first few weeks.”

“So we now know we want to put the fish in the water between May and June to promote the most effective post-release survival,” Schloesser said. “We really like to take advantage of the high-quality natural systems in the Charlotte Harbor, because that’s where we have seen the highest survival rates.”

The sooner the fish get into high- quality water, the less stress there is, and the fish are more likely to survive.

Lemon Bay and Stump Pass have proven to be highly adaptive areas for juvenile fish to thrive.

“Unfortunately, this past summer was also a peak time for red tide toxins along the beaches of Gasparilla and Little Gasparilla islands,” Schloesser said. “That’s when we started to increase our stock project.”

The mortality gets less and less as the fish get older and larger. By the time they are a year old, Florida Fish and Wildlife considers them a part of the population. The snook spawn on an outgoing tide and come back to the shore with the tide.

Dr. Main has been with Mote for more than 18 years, and her research has proved that fish can grow so fast in a laboratory environment that within a 6-month period they are about the same size as a 1-year-old fish.

Stock enhancements of species of fish are very important when there is a mass mortality event, like a rough battle against red tide.

Passive integrated transponder (PIT) tags are used to track the fish once they are released into the estuaries.

“Once the tag is successfully implanted, it will last the life of the individual,” Schloesser said. “It’s similar to the kind of tag that is implanted in cats and dogs. So we are able to get all the data without having to kill the fish.”

Scientists are able to get some usable data back from the PIT tags after just one year.

Dr. Main said after the cold kill in 2010, Mote scientists increased the sampling of snook in order to research the death rate.

“We caught female fish that were much smaller than healthy fish would be, and the reason for that is because the larger ones were dying from the cold water.”

They key to maintaining a healthy stock is to not change the natural genetics of the population.

“Lately, we’ve been experimenting and putting pairs of fish in small tanks, and we’re trying to see if we can increase genetic diversity,” Main said. “We’re not doing production stock enhancement yet … we’re still in research and development mode.”

Mote’s “Adopt-a-Snook” initiative includes raising and releasing 5,000 hatchery-reared juvenile snook along Charlotte Harbor. Snook are one of the most sought-after catches by anglers in Southwest Florida, and they return annually to the same beaches to spawn during the summer months.

“One of the potentially most devastating and highly visible impacts around Charlotte Harbor was to the spawning snook population,” said Dr. Michael P. Crosby, president & CEO of Mote Marine Laboratory, in a press release. “Many of the dead snook were laden with eggs to produce the next generation.”

Mote’s “Coffee with a Scientist” events are scheduled on Wednesdays throughout the season each year. The events are free and open to everyone.